Institute provides journalists a unique experience on the Mississippi 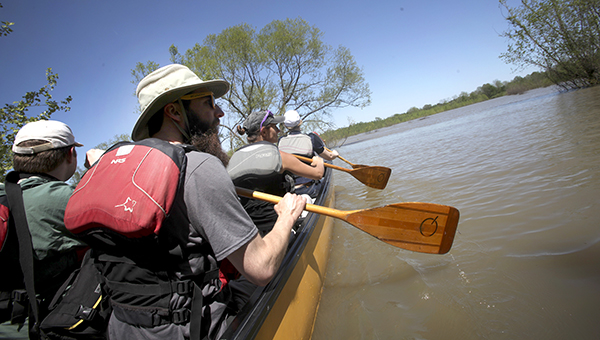 Fellows with the Institute for Journalism and Natural Resources canoe the Mississippi River near Helena, Ark. with the Quapaw Canoe Company. (Courtland Wells | The Vicksburg Post)

It is the job of news organizations to inform the public.

And whether one is a journalist, photojournalist, editor or producer, in an effort to serve to the best of their ability, understanding the subject matter is essential.

To help provide education for those in the field, the Institute for Journalism and Natural Resources, a non-profit organization, provides fellowships geared toward improving coverage of natural resource issues.

Through multi-day trips, journalists have an opportunity to travel throughout North America then return home to promote public dialogue about natural resource issues through better journalism.

Courtland Wells, The Vicksburg Post’s photojournalist, had the opportunity in April to make a 7-day journey with the group during their Lower Mississippi River Institute fellowship.

Wells, a graduate of Southern Mississippi, was one of 18 in the journalism field awarded the fellowship.

Wells said he had had no prior knowledge of the Institute for Journalism and Natural Resources fellowships until their associate director, Adam Hinterthuer, reached out and encouraged him to apply.

“I think what initially grabbed me (about the program) was being able to get out and learn about more stretches of the river outside of Vicksburg, and how other communities are influenced and affected by it,” Wells said.

In addition to having the opportunity to expand his knowledge of the resources surrounding the Mississippi River, Wells said the fellowship also allowed him to collaborate with other journalists and photojournalists making the trip.

“Learning as much as I did goes hand-in-hand with being able to meet and learn from such high-caliber journalists from across the country. It’s not every day you’re thrown into a bus, plane, canoe, or hotel room with 17 other people from your field,” he said. “It really created a lasting bond between us.”

Wells’ trip began on April 24, with the group starting their journey in St. Louis.

“We then traveled to Cairo, Ill., and from there to Memphis,” he said.

While in Memphis, the group met with the Rev. Tondala Hayward, local residents and Dr. Kathryn Hick, who is the associate professor in the department of Anthropology at the University of Mississippi.

Fellows learned about the sanitation workers’ strike of 1968 and the ongoing fight against environmental racism and how it was the cause the brought Martin Luther King, Jr. to the town in what would be his final days.

From Memphis, the group traveled to Helena, Ark., where they had the chance to canoe on the Mississippi River and camp on the levees with the Quapaw Canoe Company.

Sitting around a campfire, the group had the opportunity to explore some of the difficulties of doing good journalism on complex issues, while also talking about tips and tricks of reporting and writing.

“From there we went to Minter City,” Wells said, and then stopped in Vicksburg.

As the group made their way to Baton Rouge, studies continued to include discussions on the environmental resources, as well as the people and cultures along the Mississippi River.

The final leg of the trip was spent in New Orleans. During the stay, the fellows had the chance to listen to Matt Gresham, Port of New Orleans Director of External Affairs, Sean Duffy, executive director of Big River Coalition, and Spencer Murphy, who is the general counsel of the Canal Barge Company Inc.

The men shared with the group the importance of the Port of New Orleans and how it anchors the United States to the global economy.

With a packed week of education and travel, Wells said, he has yet to digest all he learned.

“It’s pretty much hard to put into words just how much I learned on the trip,” he said. “I remember talking to people on the bus one night and we both came to the point that we’ve learned so much we don’t know just how much we’ve learned.”

However, he did say the fellowship gave him a deeper understanding of the Mississippi River.

“This program, if anything, has given me another perspective or ideas of how to cover situations that deal with the river and how it pertains to Vicksburg,” Wells said.