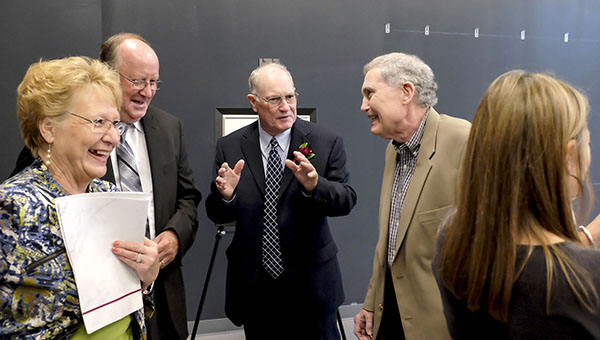 Warren County Board of Supervisors President Richard George speaks to attendees during a ceremony to dedicate the new Academic and Career-Technology building at Hinds Community College Vicskburg-Warren campus Friday. The building was named the George-Oakes Building after George and Hinds Community College Board of Trustees member Donald Oakes. (Courtland Wells | The Vicksburg Post)

When Joe Loviza became involved with the effort to build a then-Hinds Junior College Vicksburg-Warren campus on Mississippi 27, he never envisioned it would grow like it has.

“I’ll be honest, I never would have envisioned it, even sitting back dreaming, what are we going to have for Vicksburg,” Loviza, the campus’ first dean, said as he stood in one of the classrooms of the campus’ Academic and Career-Technical building.

The building was named for Richard George, president of the Warren County Board of Supervisors, and Donald Oakes, former Vicksburg Warren School District superintendent and current member of the Hinds Community College Board of Trustees, during a ceremony Friday.

“It’s a real honor,” Oakes said. “I was surprised, but I was really honored that the Board of Trustee wanted to do this, and it’s a real honor to be associated with Mr. George. He was instrumental in getting the money for this together. It’s a big day.”

George said he was proud “to have the opportunity to be a part of it, especially with Donald Oakes, who is a career educator. The man is a longtime friend. That’s what makes it special, to know that we were able to be part of something that is important to our youth and our future.”

The downstairs training lab will be named the Bruce Training Lab in honor of William F. “Sonny” Bruce, a former superintendent of Vicksburg public schools.

Also in the new building, the upstairs multipurpose room will be named the Peets Multipurpose Room in honor of Charles Peets, who has served on the Vicksburg-Warren County Campus Advisory Board for many years and is currently serving as chairman.

“We’re looking at about 5,000 new jobs in this area,” Loviza said, “And this thing (building) is going to be the center of it. We’re going to have people training; we’re going to be open 24 hours a day for those who need it. That’s what it means to me; getting the best trained work force in Mississippi.”