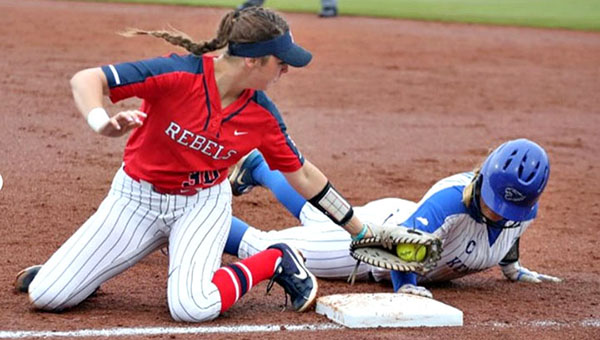 Abbey Cheek hit a two-run home run in the first inning, Autumn Humes threw a shutout, and Kentucky eliminated Ole Miss from the SEC Tournament with an 8-0 run rule victory.

“I felt like we were excited and ready to play, we got some people on base, and we just couldn’t get that big hit, especially in those first couple innings,” Ole Miss coach Mike Smith said. “Even though Cheek hit that two-run bomb, I still felt like we had the momentum and then the wheels fell off. That’s the nature of the game. They capitalized on some of the mistakes we made, they got some big hits, they attacked our pitching early and got in some good counts to hit in, and that’s why they beat us 8-0.”

Fourth-seeded Kentucky (33-21) reached the semifinals for the first time since 2014. Ole Miss (37-17), which won the tournament two years ago, will have to wait for the NCAA Tournament selection show on Sunday to find out where it’ll head next.

The Rebels were the fifth seed in the SEC Tournament and are No. 17 in the NCAA’s RPI rankings. Friday’s loss might have cost them a chance to host an NCAA Tournament regional, but shouldn’t keep them out of the national tournament altogether.

Ole Miss has reached the NCAA Tournament in three consecutive seasons. It had never reached the tournament before 2016.

Ole Miss took two out of three from Kentucky in a series in Lexington in early April, but Friday was Kentucky’s day.

Ole Miss left two runners on base in both the first and second innings, as well as two more in the fourth, and fell behind early. After Cheek’s homer, the Wildcats struck for six runs in the third inning to blow the game open.

Sarah Rainwater scored on a passed ball and Mallory Peyton followed with a two-run double to put the Wildcats ahead 5-0. Three consecutive RBI singles by Bailey Vick, Jenny Schaper and Katie Reed pushed it to 8-0.

For Kentucky, Humes (13-10) allowed six hits and one walk in five innings, but worked out of several jams. She had four strikeouts.

“In those situations, when you’re going to pull a pitcher, you’re giving them the situations where it is and just trying to get back in and make this game close again,” Smith said of his pitching changes.. “It’s not the time for a Rocky speech or anything, we’re at the stage of the year where if they can’t get themselves motivated to play in a tournament like this, the type of atmosphere that we’re in, then I don’t know what else is going to get you motivated. We just had some tough luck.”

Alabama A&M 4, Alcorn State 0
Madison Pozzi hit a two-run home run and Alabama A&M scored all of its runs after a two-out error in the fourth inning to end Alcorn State’s season in the Southwestern Athletic Conference Tournament.

Alcorn (14-24) had 11 baserunners against Alabama A&M pitcher Lauren Hayden, on seven hits and four walks, but left 10 runners on base.

Brooke Roach had three hits and Victoria Tyler had two for Alcorn. Lisabelle Hansell went 2-for-2 and scored a run for Alabama A&M (24-18).

A couple of weeks ago, Ole Miss and Mississippi State played for fun. This time, it counts for a whole... read more