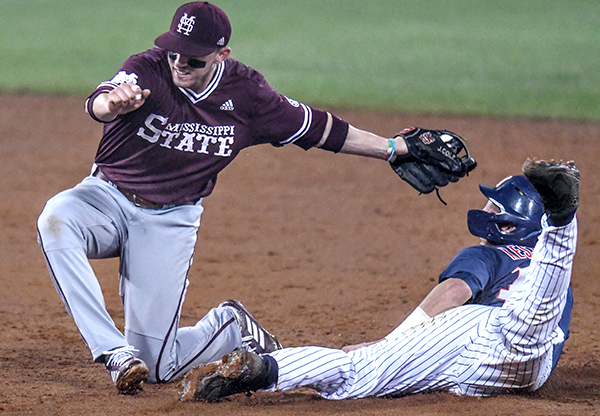 OXFORD — Two hours of rain delays and another 30 minutes of fog delay wasn’t enough to put away Ethan Small and Mississippi State on Friday night.

The rain delay in the middle of the sixth inning forced Small off the mound, but his work was done. The left-hander had 10 strikeouts in just five innings of work, leading the Bulldogs to a 2-0 win over Ole Miss to start the three-game series.

Ole Miss (32-18, 15-10 Southeastern Conference) got just three hits off of Small in 16 at-bats. Small has thrown 12 consecutive scoreless innings and has only allowed five hits in his last three outings.

“Both teams pitched it really, really well. Of course Small, and Ethridge too,” Ole Miss coach Mike Bianco said. “We had a couple of opportunities where we just couldn’t cash in.”

While the night was dominant for Small, he had to leave after the delay in the sixth. Unfortunately for the Rebels, his replacement Jared Liebelt was nearly as impressive.

Liebelt pitched the final four innings, allowing three hits and working his way out of a jam in the eighth with a double play. He and Small combined on a shutout for the second straight Friday.

The four innings for Liebelt were a career high. Small recorded his ninth 10-strikeout game of the season.

This was the first time this season that Ole Miss has been shut out.

“Ole Miss is one of the best offensive lineups in the country and I thought Jared and Ethan both pitched great,” Mississippi State coach Chris Lemonis said.

The Rebels had their best scoring opportunity in the eighth inning. Back-to-back singles from Cole Zabowski and Kevin Graham brought Justin Bench to the plate with two on and no outs.

Bianco decided to have Bench bunt, even after he was down 1-2 in the count. Bench bunted foul for a strikeout. Josh Hall then ended the inning by grounding into a double play.

The Rebels’ aggression on the basepaths also hurt them. In the first inning, Tyler Keenan got thrown out trying to stretch a single into a double. In the second, Thomas Dillard was thrown out stealing.

The offensive stars for Mississippi State (40-10, 16-9) were first baseman Tanner Allen and shortstop Jordan Westburg. They teamed up to produce both of the Bulldogs’ runs and had five of their eight hits.

In the third inning, Westburg reached base on a two-out single and then scored from first on a double by Allen.

In the fifth inning, Gunner Halter led off with a single and went to third on a pair of ground outs. Westburg worked a two-out walk to keep the inning alive for Allen, who singled up the middle to score Halter and give the Bulldogs a 2-0 lead.

Westburg finished the game 2-for-3 with a run scored, and Allen was 3-for-4 with two RBIs.

“In two-strike at-bats and falling behind, (Allen) fought his way back,” Lemonis said. “(Ethridge) is a really good arm, too. We were having a hard time getting good swings off of him. Just to give us a little cushion both times, they were some really good swings.”

Game two of the three-game series is Saturday at 6 p.m. at Swayze Field in Oxford.