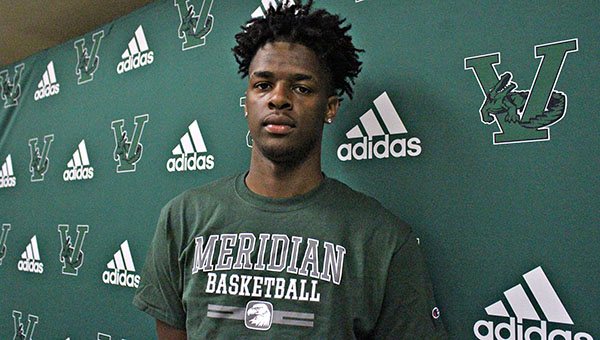 Devan Kiner came to Vicksburg in a tough situation. He was the new kid in town, moved in for his senior year of high school, trying to mesh with a bunch of new classmates and teammates.

He’s leaving in a much better place, and with a college basketball scholarship.
Kiner, who won the Vicksburg Post’s boys basketball Player of the Year award in his only season with the Gators, recently signed with Meridian Community College.

Kiner is the third member of this year’s Vicksburg High team to sign with a junior college. Guard Ty’Ron Moore also signed with Meridian, and forward Jamison Norfort signed with Holmes Community College.

“That’s a great class. I think the last time we did that was when (Mychal) Ammons was in school (in 2011) and we had four that year,” Vicksburg coach Kelvin Carter said. “It’s another opportunity for them to move on. I’m a big time advocate for junior college because you can put that work in and still get to the big lights, and these guys need that juco step.”

Kiner had several other offers, including one from Division I Mississippi Valley State. He said playing at a two-year junior college will allow him to further develop his game and, hopefully, get more offers when the time comes.
After one or two years, junior college players are allowed to move on to a four-year school.

“I’ll have the chance to go and get my body developed, get stronger and get smarter, and learn how to play and shoot my position better. I’ll get more experience so when I get to the four-year level I’ll already be more court-ready,” Kiner said.

Kiner moved to Vicksburg from Dallas last summer and quickly made a name for himself on the basketball court. The 6-foot-6 guard led Warren County in scoring with 14 points per game and was in double figures in 19 of 24 games this season. He helped the Gators reach the MHSAA Class 5A state tournament while playing a number of roles on the court.

Kiner mastered it, though, and now he’ll get the chance to continue his basketball career. The magnitude of the opportunity was not lost on him.

“It’s impressive, because not everybody gets a chance to play basketball after high school. I’m real grateful. It’s pretty exciting. It’s a relief. There was a point in time I never thought I could play college basketball. This is big right here,” Kiner said. “I’m happy about it. I’m ready to get straight to work.”