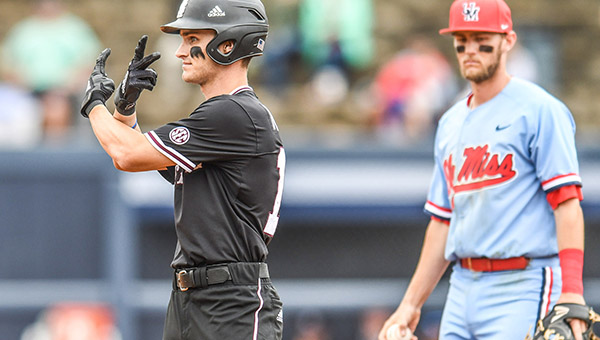 OXFORD — Mississippi State has its own beautiful ballpark in Starkville. It only feels like it owns the one in Oxford.

The Bulldogs scored nine runs in the top of the fourth inning on Sunday — all with two outs — and rode that rally to an 11-5 victory and three-game sweep of archrival Ole Miss.

Mississippi State (42-10, 18-9 Southeastern Conference) has swept the last two series in Oxford, won its last four series against Ole Miss (32-20, 15-12), and is 14-2 against the Rebels over the past four seasons.
Ole Miss had won its last two SEC series, but was swept for the first time this season.

“It’s a really bad weekend for us. It’s just a shame,” Ole Miss coach Mike Bianco said. “So much riding on the weekend and you’re playing your arch rival and you just play awful.”

Mississippi State won for the 10th time in 11 games overall since being swept at Arkansas April 18-20. It won all four games this season against Ole Miss, including the annual Governor’s Cup game in Pearl — which, coincidentally, marked the start of its recent hot streak.

With the sweep, the Bulldogs also virtually locked up one of four first-round byes in the SEC Tournament. They’re still a game behind Arkansas for the SEC West lead, but are three games ahead of Ole Miss and LSU with three conference games remaining.

The Bulldogs finish the regular season with a home series next weekend against South Carolina and only need to win one game to earn a bye in the tournament.

“Except for Arkansas, we’ve played like that most of the year,” Mississippi State coach Chris Lemonis said. So I think our three days in Fayetteville were abnormal and everything else has been pretty normal. We’ve been a consistent product most of the year.”

Ole Miss got out to a 2-1 lead through three innings Sunday, and starting pitcher Gunnar Hoglund retired the first two batters in the fourth. Then everything unraveled.

Three consecutive singles, the last by Marshall Gilbert, tied the game and chased Hoglund. Reliever Zack Phillips walked the next two batters with the bases loaded to bring in two more runs.

Max Cioffi replaced Phillips on the mound and immediately gave up a two-run single to Luke Hancock. Justin Foscue and Rowdey Jordan followed with back-to-back doubles and Dustin Skelton — who had started the rally with a single — got another hit to bring in Jordan and make it 10-2.

It was Mississippi State’s highest-scoring inning in an SEC game since April 2017. It was also their second big rally in this series. The Bulldogs scored six runs in the seventh inning on Saturday on their way to an 8-5 victory.

“We’ve done that this year. We string some hits together,” Lemonis said. “We had the rally last night and the rally today. We kind of get hot like that. We have a lot of good hitters that build on each other.”

Ole Miss burned through seven pitchers. The last four were effective, allowing only one more run in five innings, but Hoglund, Cioffi and Phillips allowed a combined 10 runs, four walks and 12 hits in four innings.

“He was really good. I don’t think we played great defense behind him, either,” Lemonis said, noting the Bulldogs committed three errors. “The fastball was sinking, the change was really good, and he gets them to beat the ball into the ground a lot. When we make plays, he’s really good.”

WC softball tryouts Tryouts for Warren Central’s varsity softball team will be held May 15 and 16 at Lucy Young... read more