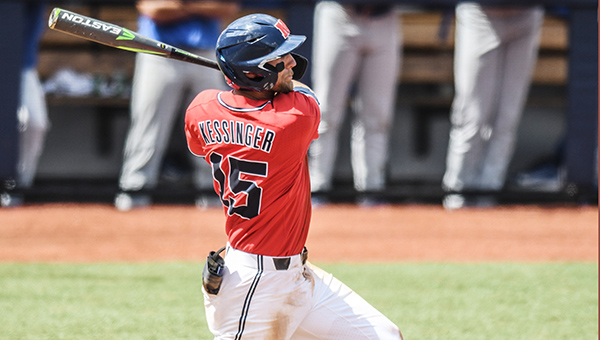 Ole Miss shortstop Grae Kessinger is one of five finalists for the C Spire Ferriss Trophy, given annually to the best college baseball player in Mississippi. (Bruce Newman/The Oxford Eagle)

Southern Miss outfielder Matt Wallner is the fifth finalist, and has earned that distinction for the second year in a row.

Wallner is hitting .295 this season, with 15 home runs, 44 RBIs and 10 doubles. He ranks second on Southern Miss’ career home runs list with 50. His 15 home runs this season are tied for second in Conference USA.

Mangum, a senior, is a finalist for the third time and won the Ferriss Trophy in 2016. He could become the first two-time winner of the award that was first presented in 2004.

Mangum ranks second nationally with 93 hits this season. Earlier this year he became both Mississippi State’s and the Southeastern Conference’s all-time leader in hits. He currently has 368 in 247 career games.

Small is enjoying his best season on the mound for Mississippi State, as he owns a 7-1 record and 1.73 ERA in 13 starts. His 132 strikeouts rank No. 2 nationally and are No. 6 on the MSU single-season list. He has not allowed a run in his last two starts, and has only allowed five hits in his last three.

Kessinger, a junior, has reached base in 40 consecutive games, the longest active streak in the SEC. He’s hitting a team-best .355, with 55 runs scored, 17 doubles and 39 RBIs while starting all 52 games this season at shortstop. He’s also 14-of-16 on stolen base attempts.

Keenan has started all 52 games at third base after entering the year as a preseason All-SEC second-team selection. The sophomore is hitting .299 and leads the team with 11 home runs and 55 RBIs.

The Ferriss Trophy will be awarded at a luncheon at the Mississippi Sports Hall of Fame and Museum in Jackson on May 20. The banquet begins at 11:30 a.m. and tickets cost $40 per person.

The winner will be determined by voting from Major League Baseball scouts, Mississippi’s college baseball coaches, and fans. The scouts and coaches votes count for 90 percent of the total, and the fans for the final 10 percent.
Online fan voting will be open until Saturday at cspire.com/ferriss.