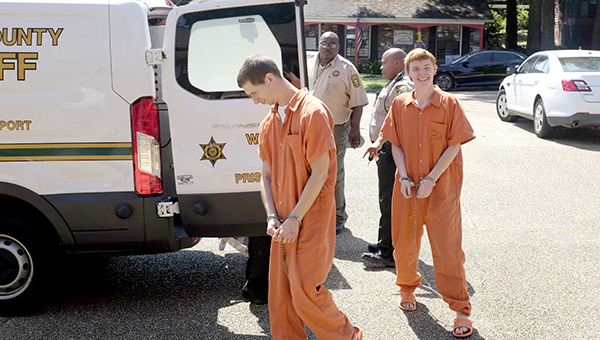 Justin Tilley, 17, one of the suspects arrested by Warren County Sheriff deputies Monday after a nealry 24-hour manhunt, smiles as he walks into Warren County Justice Court Tuesday for his initial court appearance. (Courtland Wells | The Vicksburg Post)

Two men who eluded sheriff’s deputies for almost a day will remain in the Warren County Jail.

Three adults who are accused of helping the pair with eluding officers — Glenn Johnson, 29, and Victoria Daniels, 23, 211 Miller St. Lot 48;and Destiny Brand, 24, 220 Old Mount Alban Road  — are each charged with two counts of hindering prosecution and rendering criminal assistance.

Their bonds were set at $70,000 each. All five people asked for an appointed attorney.

Brooks, 22, and Tilley, 17, are each charged with two counts of auto burglary, and one count felony fleeing and aggravated assault on a law enforcement officer in connection with their attempt to flee deputies May 12. They are accused of ramming a marked sheriff’s office unit during the chase.

They also face charges of receiving stolen property involving the May 8 theft of a Chevrolet Silverado pickup they wrecked and abandoned.

Brooks also objected to Jefferson’s refusal to set a bond, arguing he deserved a bond. He also argued with officers in the courtroom, forcing Jefferson to slam down his gavel and tell Brooks to direct his comments to him.

Brooks continued making comments during the hearing and tried to talk with Tilley, who was seated next to him. Deputies later separated the two, but they continued to maintain eye contact during the hearing. All five suspects were directed not to talk except to the judge.

Daniels also made a comment about her bond, shaking her head and then attempting to talk with Brooks, who was sitting several rows in front of her.

Jefferson again stopped the hearing, telling the five people, “Obviously you people have a problem with instructions.”

Brooks then tried to claim that Johnson, Daniels and Brand had done nothing.

Brooks and Tilley led deputies on a high speed chase before fleeing on foot near Timberlane Subdivision about 5:30 p.m. May 12.

Warren County Sheriff Martin Pace said Monday that more than a dozen deputies, including K-9 units, were involved in the search for the pair. He said deputies also stopped and checked cars traveling through the area during the manhunt. The pair was caught about 1:30 p.m. Monday hiding in Johnson’s trailer.