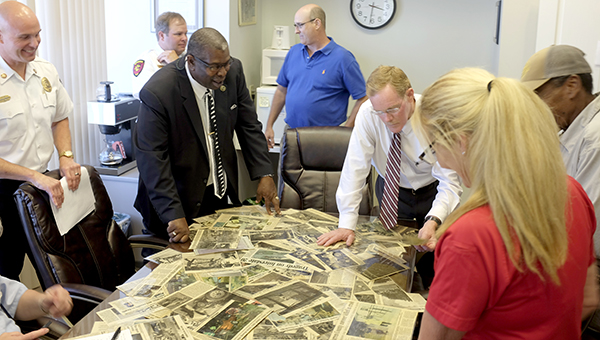 City and county officials joined former and current employees recently as former crewmembers reminisced about their careers with the Vicksburg Fire Department and the start of the ambulance service. (Courtland Wells | The Vicksburg Post)

A Vicksburg Fire Department ambulance, whether parked at a fire station or en route to a call, is a common sight in Vicksburg and Warren County.

There was a time when it wasn’t.

Until 1969, the ambulance service city and county residents are familiar with and expect was non-existent, and what service was available was provided until 1967 by local funeral homes, that put a red light and siren on a hearse to get an injured or ill person and take them to the hospital; no emergency medical care was provided.

“There was a saying in the neighborhood I grew up in,” he said. “If they would see one of the hearses come through the neighborhood and it didn’t have the siren on, you’d say, ‘Well, they don’t have too much of a chance.’ If you see one come with the siren on, you’d say, ‘Well, they might have a chance.’ That’s the way it was back then.”

“So the same guy changing the oil in your car or changing a tire, is going to wash his hands and jump in an ambulance and go give you a ride to the hospital,” he said.

On May 16, 1969, all that changed, Fire Chief Craig Danczyk said, “When Gov. John Bell Williams delivered the keys to two new ambulances to the City of Vicksburg and Warren County.”

Those first two ambulances, and a third on order, were bought with federal funds from the Governor’s Highway Safety Program.

“I remember the first two ambulances,” said Pace, who as a child spent time at one of the fire stations. “They were Pontiacs, and one of them had red interior.”

Retired assistant chief Donell Wince said the ambulances were built like a hearse with a raised roof.

“You could actually get on your knees and work in it,” said Paul Massey, a retired firefighter who spent his 20 years on the ambulance. At the time, the ambulances had emergency medical technicians who were trained by local doctors and offered basic life support to patients on the way to the hospital.

“We had two ambulances, one per shift, and each shift would average 10 runs a shift. One of those or two of them would be a trip to Jackson. That was a 24-hour period. Sometimes we wouldn’t get any sleep or we would get some sleep.

“We used to work the area on I-20 to Edwards,” Massey said. “The thing about going to Edwards was when you got there, they had police car sit at Stuckey’s and they’d take you to where you were going.

“We went north to the other side of Valley Park, and west, we went to Mound, La.”

At the time, Wince said, “Speed was the key. Those ambulances could outrun anything on the road.”

At one point, the fire department moved from the Pontiac ambulances to vans.

“Back then, we used to haul four people,” Wince said. “You hung up two, one on the stretcher and one over on the mat (bench).

Massey said canvas stretchers were suspended from hooks that came from the ceiling.

“You took the two smallest people there, and you picked them up and hung them on a hook,” he said. “Then you would take the biggest and put them on the stretcher, and then you’d take the other one and put him on a bench and you set on the floor.”

When the ambulance arrived at the hospital, he said, the patient on the stretcher went out first so the medic could get suspended patient down.

“If you did CPR, you grabbed on the rail and you had one hand,” Deputy Fire Chief Derrick Stamps said.

“When you got to the hospital, you were so tired they had to help you out of the ambulance,” Massey added. “We delivered a lot of babies back then. Whether from Edwards to here or from Mound to one of the hospitals.

“When a woman started delivering a baby, you had to deliver a baby. I have pulled off the side of the road and delivered it and then started back on the road. You couldn’t deliver a baby while you were bouncing.”

In 1990s, the ambulance service changed from basic life support to advanced life support service with paramedics, and 2 to 3 ambulances were staffed for each 24- hour shift.

In 1997, the VFD created a “transfer ambulance” division to assist in non-emergency calls that continued for several years, until the fire department went to five ambulances per 24-hour shift.

“It was a learning experience,” said paramedic Kim Sellers, who got her paramedic training while serving on the transfer ambulance.

“We would go out and pickup patients and take them to their regular doctor visits, and a lot of the transfers we did we took a lot of patients from the hospital to the cancer treatment center or other treatment centers, and we would get to know these people because some of them we would transfer on a daily basis.

The fire department’s ambulance fleet now totals 10 ambulances and each is staffed by a paramedic and an EMT.

The present cost to purchase and equip an ambulance runs about $300,000, just to get started.

“On each fire truck you have an EMT and you may have a paramedic on the truck,” Danczyk said, adding having the extra trained emergency medical responders can be a benefit in some circumstances. “We have eight fire trucks per shift. That’s a minimum of eight paramedics on each shift.”

Stamps said what has made the department’s ambulance service so successful is the pride established early by people like Massey and Wince.

“It just keeps going on, and all of that defines the Vicksburg Fire Department — to have a pride in the service. To deliver the best service you can give and not accepting anything less. The people who ride the ambulance are chosen; they’re not randomly picked off the shift.”

“When you work with people, you eat with them, you spend the same time in the dorm with them; you’ll give your life for them when you make an ambulance run. And they’ll do the same thing for you.”

“We want to keep moving ahead,” Danczyk said, “And we want the people to know what they have, and what they have is a jewel. They’ve entrusted us to take care of it, and I think we’ve done that. And we’re going to try and make it better and leave it for the next admin staff, the next paramedic the next firefighter.”