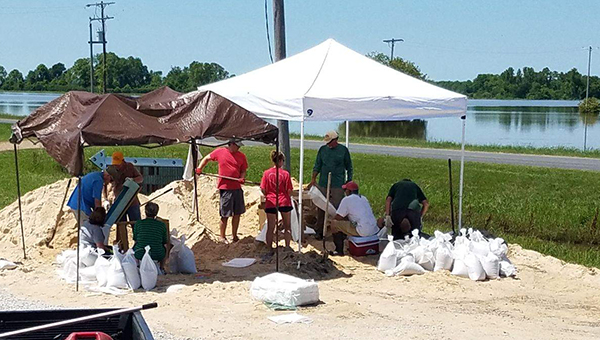 Eagle Lake residents — along with volunteers from throughout the area — work to pack thousands of sand bags Tuesday morning. (Submitted Photo)

As backwater flooding continues in the Yazoo Backwater area, area residents and emergency responders are providing what assistance they can to besieged Eagle Lake residents.

“We have delivered sand and 32,000 additional sandbags to Eagle Lake, and inmates from Issaquena County and MDOC (Mississippi Department of Corrections) are up there now working (to fill bags),” Warren County Emergency Management director John Elfer said. Those sandbag totals are in addition to more than 70,000 that have already been filled and placed.

A group of seniors from Warren Central High School joined the effort Tuesday.

During Monday’s work session for the Warren County Board of Supervisors, representatives from Eagle Lake gave personal accounts and updates on the damage and expected damage from the ongoing flood.

“It’s bad. You just don’t know,” said Chris Libbey, assistant fire chief with the Eagle Lake Fire Department. “And when the water starts to go down, the devastation we are going to see will be awful.”

Libbey asked supervisors to put their “boots on the ground,” seeing for themselves the efforts to fight back the rising flood waters.

“The people just want to see you. It would do their spirts a lot of good to see you all come up there and show your support,” Libbey said.

Water in the backwater area continues to rise, Elfer said, adding the present level in the area is 97.3 feet and is projected to reach 98 feet. Because the landside and riverside levels at the Steele Bayou Control Structure are so close, he said, the U.S. Army Corps of Engineers Vicksburg District closed the Steele Bayou gates Saturday.

The Mississippi River is projected to reach a projected crest at or near 50 feet on May 20 because of weekend rains in the Arkansas River Basin.

“The level of Eagle Lake is 92.3 feet,” Elfer said, “That’s at the Muddy Bayou structure on the lakeside.”

He said several streets inside the community are either threatened by water or covered.

Sea Island Drive has water on it but is still passable. Eagle Lakeshore Road is down to one lane in places and in some spots water is over the road, and Shell Beach Road is closed. There are two areas where Shell Beach Road has been washed out, Elfer said.

“We’re asking people to stay out of the area,” he said. “The last thing we need is sightseers, and people need to obey the barricades. They are put up for a reason.”