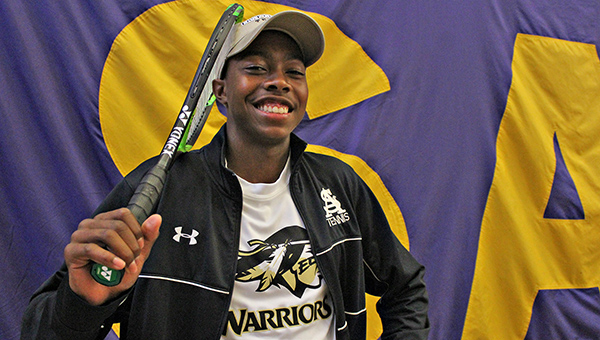 Once upon a time, Chris Albert was an aspiring baseball player learning the game at Halls Ferry Park. One day at practice, a wayward foul ball changed that trajectory forever.

“One night, my ball went out in the parking lot and my barber was talking to my dad. He had a tennis racket in his trunk and he pulled it out and was hitting the ball up,” Albert said. “I got it and I was doing it. He was telling me about the free lessons, the stuff that I work now teaching the kids, and I asked my dad could I go up there?”

It wasn’t that easy, of course. Albert made a deal with his father that if his team won an upcoming tournament he’d get to leave the baseball field for the tennis courts up the hill. The team won, Albert left, and he never looked back.

“The time came around and we won. I had one trophy in my hand, he had a trophy in his hand, and we were walking out in the parking lot and I asked if I could go up on the hill. He was like, ‘What hill? What are you talking about?’” Albert recalled with a laugh. “We went up there the next day and I haven’t quit playing. He let me play and I thank him for that. He could have easily forced me to keep playing baseball, but he let me pick a sport.”

He signed a few weeks ago and had a formal ceremony Monday in St. Al’s library.

“I feel like it’s a very big step because I’m fixing to go to college. Not everybody gets to do that, especially to play a sport that they love. It’s a big deal. I’m ready,” Albert said. “I think I’m the first person in my family to get a scholarship to go play in college. I know they’re going to come support me. When I found out, I was jumping.”

Albert has always been a good athlete. Although he left baseball behind a long time ago, he also played on St. Al’s basketball team this season. It, along with a natural enthusiasm and passion for tennis, is a big part of what has made him successful on the court.

“I knew the kid was athletic. I could see that. His dad wanted him to play baseball but I told him if he leaves him out here I’ll get him a (tennis) scholarship,” said St. Al coach Rick Shields, who also runs the City of Vicksburg’s youth tennis program and has coached Albert since the beginning. “I’m real proud of him. Chris likes to work, and when you get somebody that likes to work they always want to get better. The sky’s the limit for him.”

Albert won the District 3-AAA championship in No. 1 boys singles this season and reached the MAIS Class AAA state tournament. He lost in the state semifinals to eventual champion Colin Hartman of North Delta.

Albert said tennis is simply the sport he loves most, especially when he can relax and have fun during a match.

“There’s nothing like opening a fresh can of balls and getting the smell, and just hitting the ball. It’s controlled by you and you’ve got to do what you’ve got to do,” Albert said. “It’s been plenty of times when my dad gets on me because when I’m on the court it looks like I’m not serious. And when I’m serious, and I play at his level of serious, he’s like, ‘Why do you look so low and grumpy?’ And I’m like, ‘That’s not how I play.’ When I’m smiling and energetic like that, it just comes out natural.”