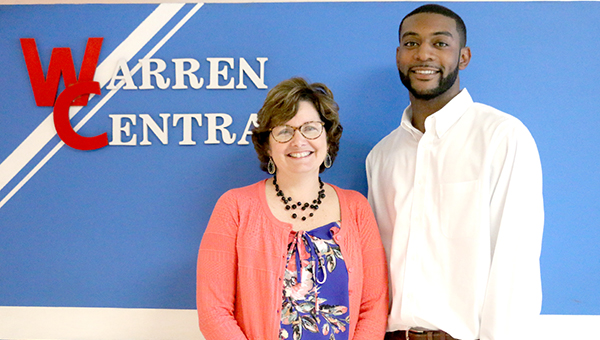 In one week Chris Greene will walk across the stage and receive his high school diploma.

While this will mark a milestone for Greene, another achievement the senior has received is being named Warren Central High School’s STAR Student for the class of 2019.

“I was ecstatic and honored when I was notified that I earned Star Student. My mind was going 100 mph, but I can remember thinking of how proud my family was going to be,” Greene said.

“Much hard work has been put into achieving this honor,” Greene said.

“I took the ACT 10 times,” he said, starting in the seventh grade.

And he said he took practice ACT tests after each attempt to help increase his total score.

“I would break each section down (of the test) and focus in on my weaknesses. I would try different strategies on each one until I could find one that worked best for me,” he said.

In addition to excelling in school, Greene is also an athlete at the school, playing football and basketball and is involved in several of the school, sponsored clubs including Mu Alpha Theta, the National Honor Society, Beta Club, Key Club, and he is on the student council.

He is also a Red Cord Community Service Participant and serves as the president of G.I.V.E. (Gentlemen of Intelligence, Valor, and Excellence.)

“This year became extremely hard with me having to balance school, sports, and work, but good time management helped me push through it all,” Greene said.

He said support from his parents, was also key in his success.

“My parents have always pushed me to give my best in everything that I do,” he said, “Therefore I put my faith in hard work and let everything else fall where it may.”

“I chose Mrs. Phillips because she is not only a great instructor, but she is a beacon of light at Warren Central. Mrs. Phillips has patience and care like no other. She puts us in positions to succeed in everything we do. She also has special sound effects that will keep anyone engaged in the lesson,” Greene said.

Phillips, who has known Green since he was a sophomore and has taught him algebra II and AP calculus, while also working with him as a sponsor in Mu Alpha Theta, said, “To be chosen as a STAR Teacher is one of the biggest honors you can receive.”

“Chris is an outstanding student across the board and when a great student chooses me, it is just the highest honor I can think of,” Phillips said.

“Chris is a gentleman, a great athlete and his character is just phenomenal. He is a leader and a great role model to all the students,” she said, adding, “He will be missed by the entire faculty at WCHS.”

“It only takes one good teacher to be that spark in a student’s life and I would like to thank all the teachers who go above and beyond for the success of their students,” Greene said.