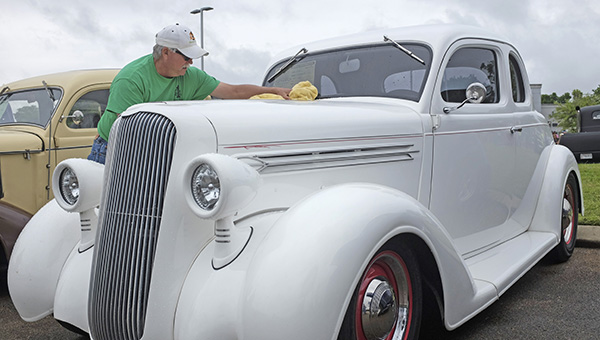 Parker said the club will have a drive-in movie Friday night, presenting the Transformers film, “Bumble Bee,” which features a 1967 yellow super beetle.

During the Saturday show, he said, “People will see a lot of pre-1949 vehicles, cars from the 20s and 30s, and muscle cars. We’ll have a variety of vehicles from pre-war to modern.

“We will have about seven military vehicles from World War I and World War II.”

The show will also include tractors and motorcycles.

All proceeds will benefit Renewal House, a Christ-centered program founded by Dr. Dan Edney featuring 12-step treatment program for men who are unable to have access to care and in need of long-term resident care.

The first 100 entries will receive a dash plaque, and awards will be presented for people’s choice, sweet 16, promoter’s choice, kids pick, best pick in tractors and motorcycles and rat rods.

Parker said Vicksburg Cruisers has been active for almost 20 years. He said the members meet in January with the National Street Rod Association to set show dates for the car clubs in Mississippi.

“The date we picked is a date that no other local club in the vicinity had a show on, so we provide the show for that weekend,” he said.

“The reason for the shows is to bring the cars to show (car) enthusiasts. Going to car shows is a big deal, and we like getting together with the other clubs around Jackson, Brookhaven. We don’t see them that often, and when we do, it’s a big family activity.

“We like to show off what we have and it’s a big thing for the city to see.”

Blackburn Motors, he said, has worked closely with the club to prepare for the show.

“Every year, Jeb (Blackburn) has been so good to us as far ‘Cruise’ is concerned,” Parker said. “He will actually clean his lot off he will take all his cars off his lot and we have complete control of his lot.

“Everything on Jeb’s lot is going to be ours Friday night and Saturday.”

And the weather, Parker said, is forecast to be good.

“This is the first time we’re looking at good sunny weather in the last three years with our show, so we’re looking for an turnout for our show.”