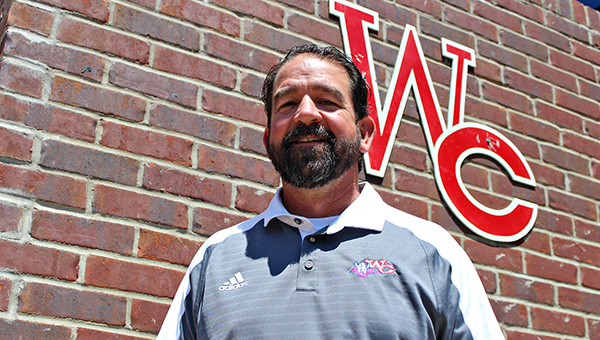 Longtime Warren Central assistant baseball coach Randy Broome is in line to become the program’s next head coach. Broome has been offered the job, and his hire is subject to approval by the Vicksburg Warren School District Board of Trustees at its next meeting on May 30. (Ernest Bowker/The Vicksburg Post)

Eleven years ago, a little burned out and ready for a new phase of his career and life, Randy Broome walked away from coaching. He got back into it eventually, but was happy to be a helpful assistant instead of taking on the massive responsibilities of leading a baseball program.

“I’d always tell (Conner) Douglas, there are four letters to remember — A-S-S-T,” Broome joked, referring to the abbreviation for assistant.

Those days should be behind him soon. Broome is ready to be a head coach once again and is in line to take the reins of the program he’s been a part of for more than two decades.

Broome has been offered the job as Warren Central’s head baseball coach. It’s only a recommendation at this point — he must still be approved by the Vicksburg Warren School Board of Trustees at its next meeting on May 30 — but for now he’s preparing to lead the team into its offseason program and for a job he previously held from 2002-08.

Broome is replacing Conner Douglas, whose contract was not renewed after seven seasons. Douglas has since been hired as the head coach at Long Beach High School.

“I knew in a couple of years it was probably going to happen where the job opened up. There were some signs there. And in the last five or six years I started feeling that fire again,” Broome said. “When the change was made, I had a gut check moment if it was something I really wanted to get back into. It didn’t take long to say yes and throw my hat in the ring.”

In addition to his previous head coaching stint, Broome has worked in the VWSD since 1997. He spent four seasons as an assistant at Warren Central — and was part of the school’s only state championship team in 2001 — before ascending to the head coaching job. After a five-year hiatus to work in administration, he returned to the baseball staff as an assistant to Douglas in 2014.

“He’s been around the program. He’s been successful here. The kids love him. He’s very competitive. So having somebody that fits all of those molds and understands the culture of Warren Central baseball is what we’re looking for,” Nailor said. “Somebody that can motivate the kids to win and be the best they can be, but at the same time can move them out of here when it’s time to move and be successful after high school graduation.”

When Broome stepped down as the head coach in 2008, it was for a combination of reasons. He was pursuing his master’s degree and a career in the administrative side of education.

The large amount of work required to simultaneously earn his master’s and lead a baseball program eventually wore him down, however.

“Through high school, through college, baseball was always a part of my life,” said Broome, who played at Meridian Community College and Mississippi College. “It seemed like the next page in my life was to get that master’s and go into administration. It wasn’t anything I was upset with about coaching. The new challenge of being a principal is what excited me about it.”

Broome worked the administrative side for five years. He was an assistant principal at Vicksburg High School and the principal at Redwood Elementary School. Eventually, however, he realized his true passion was coaching.

“Talking to my wife, I said coaching might be why I’m on this Earth. I started missing it,” Broome said.

Right around the same time, in the summer of 2014, an assistant coach position opened up at Warren Central. Broome was hired and has happily done the job of dutiful lieutenant ever since.

Whether it’s throwing batting practice, handling some of the field maintenance, or leading the junior varsity team, Broome was happy to be back in coaching without the crushing pressure and responsibility of overseeing the entire program.

“I had fun with (administration), did it, met some new connections. Going into year No. 4 of administration, I didn’t really see me finishing my career there. It wasn’t for me,” Broome said. “At that time I was very content to be an assistant and be a support guy. And it got me back home. Warren Central has been my root. Getting back to knowing that brotherhood of coaches is a big reason why, in 22 years, I haven’t left this district.”

When Broome was hired the first time, to replace current Hinds Community College coach Sam Temple, Warren Central was loaded with talent and coming off a state championship season. Next year’s team won’t be as loaded with talent as that one was — eight senior starters are graduating — but is in a similar position as a perennial playoff team in Class 6A.

The Vikings went 41-21 in Douglas’ last two seasons and reached the second round of the Class 6A playoffs both times.

Several players such as infielders Alan Kivett and Shane Lewis, and pitcher Clayton Thurman, will return to the lineup and join a rising class of sophomores and freshmen. It’ll be a bit of a rebuilding job, but Broome said a few tweaks and a focus on the little things more than a total overhaul will keep the program at a high level.

“Coming into it a second time, with the experience I’ve had and a good staff, we’ve got things still heading in the right direction,” Broome said. “The biggest thing is we need to make sure we’re putting the time and effort into this game. In the baseball world, sometimes the focus becomes how hard can I throw it or how far can I hit it. We’re going to try to get back to the team side of things. The We-ism instead of the Me-ism. If we can get them all working toward that, then big things can happen.”