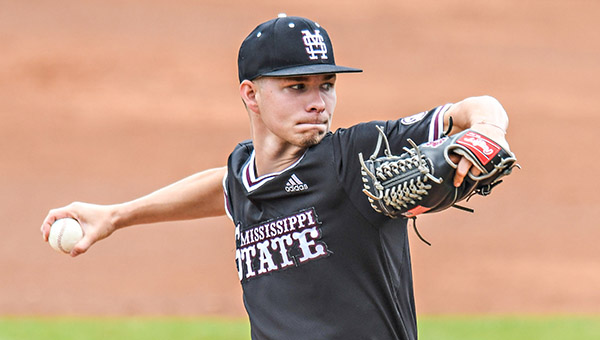 Mississippi State's Peyton Plumlee pitches against Ole Miss last weekend. The Bulldogs have won 11 of their last 12 games, are ranked No. 3 in the NCAA in RPI, and are chasing a national seed in the NCAA Tournament this weekend as they host South Carolina. (Bruce Newman/The Oxford Eagle)

The Southeastern Conference pennant race was more or less settled as the final weekend of league play began Thursday night. Now the league’s teams are starting to size up where they stand on the national stage.

Five SEC teams — Vanderbilt, Mississippi State, Georgia, Arkansas and Tennessee — are among the top 10 in the NCAA’s RPI rankings. Four others are in the top 25.

All of them should qualify for the NCAA Tournament, but that first batch is playing for much more. Specifically, the right to host a regional and a top-8 national seed that would keep them home for the super regional round as well.

Mississippi State (43-10, 18-9 SEC) is ranked No. 3 in RPI headed into a home series against South Carolina (27-25, 7-20). The Bulldogs need one more win or an LSU loss to secure a bye in the SEC Tournament, and a series win over the Gamecocks would likely lock up a national seed as well.

Mississippi State coach Chris Lemonis said, however, that they aren’t taking anything for granted.

“I do think we still have to do some work, and even if you have a national seed, don’t you want to be (a higher) national seed?” Lemonis told the Starkville Daily News. “We talked about it last weekend a little bit — 3-0, 2-1 (this weekend), national seed or not a national seed, it’s just all we can control is our next game. I know that’s coach speak, but for our guys, it’s just about trying to win the next one and finish it out.”

Mississippi State has been one of the best teams in the country of late, as well as all season long. It has only lost two SEC series, to LSU and Arkansas, and had won 11 of 12 games heading into Thursday’s contest against South Carolina.
The Bulldogs also finished the season undefeated in midweek games after beating Louisiana Tech 7-3 on Tuesday. They were a perfect 15-0.

It isn’t likely to catch either one with only three games remaining, but the depth it takes to go undefeated in the midweek should be an asset in the postseason when pitching staffs can get stretched to their limits.

“It’s really hard in this league. I know we’re usually the favorite, but the emotion of the weekend and then coming down to midweeks, it can be hard to stay focused, you see it all across our league,” Lemonis said after Wednesday’s game. “I think it is the consistency of our team. They come out every day. We do have good pitching depth so that helps you in the midweek. We’ve put a pretty consistent product on the field all year long with the effort, the focus and the energy that we play with. I am proud of the guys. I thought it was a big deal. I have never done it in my career.”