Ranis looks to Southern Miss and a music education 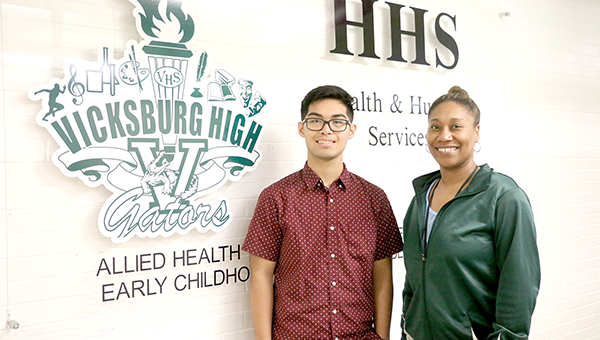 In an effort to recognize top students across the state, The Mississippi Economic Council and its M.B. Swayze Foundation sponsor the Student-Teacher Achievement Recognition (STAR) Program.

This year 342 students were selected and at Vicksburg High School, Andre Ranis was named STAR Student for the class of 2019.

“I was pretty surprised,” Ranis said, after he learned he had achieved the honor.

“I didn’t think I would be STAR Student. I thought I might be a contender, but there are a lot of smart kinds in my class, so I was really surprised and happy,” he said.

The STAR Student program recognizes the senior in each graduating class with the highest ACT.

In an effort to achieve a high score on the ACT, Ranis said he took the test about five or six times.

He also did ACT practice tests.

Ranis said it had been family and friends that had “driven him to do better.”

“My mother always pushed me and I never wanted to disappoint her,” Ranis said, “And my best friend Jon Bantugan, he was last year’s (VHS) STAR Student.”

The other students in Ranis’ classes, he said, also drove him to do his best.

While at VHS, Ranis has also participated in sports, clubs and music programs.

Of these, Ranis said, “First and foremost was the Vicksburg Pride Band.”

“Other than focusing on my studies I would focus on band. It is a very high priority,” he said.

Ranis plays the trombone and has been a member of the VHS Pride Band all four years of high school.

The VHS senior was also a member of the Vicksburg Varsity Coir, Vicksburg tennis team, Key Club and the Chick-fil-a Leader Academy, which engages students in monthly leader labs with a focus on important leadership skills that they will use to create student-led Community Impact Projects.

“She is probably the best teacher I have ever had,” Ranis said, of his AP U.S. history teacher.

“And I think that goes for elementary school and junior high school. She helped me really understand her lessons. I wasn’t really into history at all, but she really really invested in us learning about America,” he said.

McCroy said she was surprised to have been selected as a STAR Teacher.

And it had been about a month later, she said, from when she had completed the recommendation form that she found out she had been chosen as the STAR Teacher.

“It was just amazing that it happened like that,” she said.

“I never been given the title of STAR Teacher and it was an honor to be chosen. Andre is a great student. One of them that keeps me on my toes,” McCroy said.

Ranis is planning to attend the University of Southern Mississippi, he said, and major in music education.