Chris Prentiss is tied for the NCAA lead in triples. On Thursday, he hit a bunch of singles to help keep Jackson State’s season alive.

Jackson State (31-23) will play another elimination game Friday at noon against either Southern University or two-time defending SWAC champion Texas Southern.
Prentiss is tied for the NCAA Division I lead with 10 triples this season, and on Tuesday was named to the All-SWAC first team. 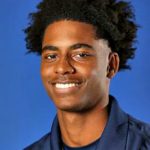 The Tigers’ leadoff hitter started Thursday’s game with a single and later scored on an error. Jackson State went on to score six runs in the top of the first to immediately take control of the game.

After UAPB (8-42) cut that margin in half, Prentiss hit a two-out RBI single in the third inning and scored on a double by Jaylyn Williams as part of another big rally. The Tigers scored five runs to go ahead 11-3 and went on to win via the mercy rule in seven innings.

Prentiss also had a single in the fourth inning. He is batting .390 this season, and is 5-for-7 with four runs scored in the first two games of the SWAC Tournament.

Dezmond Chumley also had a big day for Jackson State, going 2-for-3 with a solo home run and four RBIs. Williams was 2-for-4 with a double, two RBIs and two runs scored.

Eight of Jackson State’s nine starters scored a run. The one that didn’t, second baseman Tyler Culpepper, had two hits, including a triple, and drove in a run.

Prairie View 4, Alcorn State 1
Alex Martinez hit a go-ahead single in the top of the eighth inning, and Dalton Horner followed with a two-run home run as Prairie View A&M (18-34) eliminated Alcorn State (14-31) from the SWAC Tournament and ended the Braves’ season.

Alcorn pitcher Bukhari Brown (3-7) pitched eight strong innings, but faltered at the end of his outing. After retiring the first two batters of the eighth inning, he gave up a single and walk, followed by the big hits from Martinez and Horner.

Daniel Lingua had the first hit to get the rally going and scored the go-ahead run. He was 3-for-4 in the game.

Brown wound up allowing four runs and eight hits. He only walked one batter and struck out five.

Prairie View’s Tyler Laux (3-4) held Alcorn to four hits and one unearned run in a complete game victory. He walked three batters and struck out six.

Two of Alcorn’s hits came in the fifth inning. After Brendly Martina reached on a one-out error, he went to third on a single by Jordan McGowan and scored on another single by Edward Jackson to tie the game at 1.