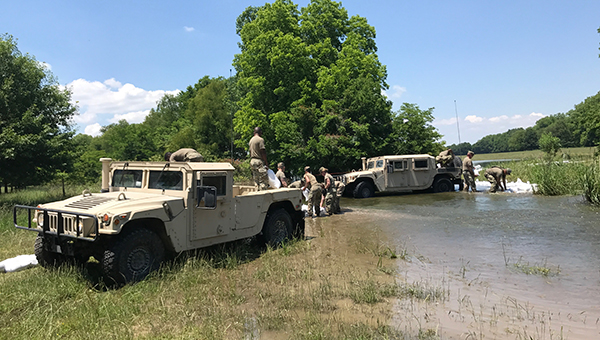 Volunteers continued laying sandbags on Eagle Lake Shore Road and other areas in their fight to keep water out of Eagle Lake as flooding approaches it 90th day of high water.

Presently, Eagle Lake is at 93 feet. Water in the Yazoo Backwater area is 97.7 feet and projected to reach 98.5. The Mississippi River is at 49.4 feet and expected to crest at Vicksburg Monday at 50 feet.

The U.S. Army Corps of Engineer closed the Steele Bayou Control Structure May 13, after the Mississippi River began rising again.

“Eagle Lake is filling up,” Warren County Emergency Management Director John Elfer said, adding water has overtopped the Muddy Bayou Control Structure at its south end and is entering the lake at other points. “We’ve got water everywhere; we’re trying to cover gaps.”

He said volunteers from the 412th Theater Engineer Command in Vicksburg are working with residents and other volunteers in an effort to stop the water.

“These are all volunteers,” Elfer said of the 412th workers. “No one has been activated.”

The extended flood has caused some people to become concerned about the condition of the backwater levees, but Brian Jordan, levee safety section chief for the U.S. Army Corps of Engineers Vicksburg District, said the levees are in good condition.

“The duration of the flood is long and saturation of the levees can happen, but our design manuals that we operate under, we designed them to be fully saturated,” Jordan said. “All of our safety factors and design parameters are set around that condition existing.”

Jordan said the modeling for the levees “assumes they’re going to be saturated. Anything that’s not saturated is just extra.”

The extended exposure to water, he said, “Is not affecting the integrity of the levees from a stability or an erosion standpoint.”

Jordan said the duration of the flood “is No. 2 all time in the longest duration flood since 1927, but it’s not nearly the height that 2011 was. We actually saw more problems in 2011, and we expended a lot of effort to mitigate those problems following that event, and we have not seen those problems crop up in the same areas.”