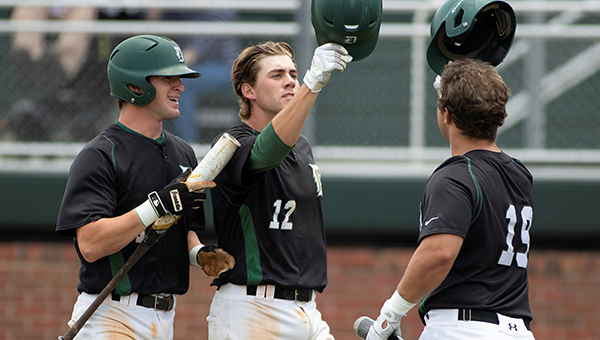 Delta State (42-12) went through the tournament undefeated to advance to the South Super Regional May 24-25 in Tampa, Fla. The Statesmen will face the University of Tampa.

Game times for the super regional have not yet been set.

Sargent went 2-for-4 with two home runs, four RBIs, four runs scored and two walks on Saturday. He hit a three-run home run in the fourth inning to give the Statesmen a 3-0 lead, and a solo home run in the top of the ninth after Valdosta State had closed to within 8-6.

Seth Hougeson (9-0) started on the mound and got the win. He allowed five runs, three earned, in 5 1/3 innings. Tommy Childree finished with a perfect 1 1/3 innings of relief for his eighth save of the season.

Delta State did not play Gulf South Conference rival Valdosta State (32-23) during the regular season, but beat the Blazers for the fourth time this postseason. The Statesmen won two meetings in the GSC Tournament, and then two more in this regional.

Ole Miss 5, Tennessee 4
Ole Miss is headed to Hoover on a positive note.

Tyler Keenan hit a three-run home run as the Rebels raced out to a 5-0 lead, and then held on to win the series and regular-season finale at Tennessee (38-18, 14-16 Southeastern Conference).

Ryan Olenek went 2-for-4 and then moved from center field to the pitcher’s mound for the ninth inning. He retired the Volunteers in order for the first save of his college career.

Ole Miss starter Gunnar Hoglund retired 11 of the first 12 twelve batters he faced, including 10 straight after a one-out double in the top of the first inning. He wound up going six innings and allowed three runs, and struck out four.

Andrew Eyster went 3-for-4 with two home runs, three RBIs and three runs scored, and Luke Berryhill hit a three-run homer to lead South Carolina (28-27, 8-22 SEC) past the Bulldogs in the regular-season finale.

The Bulldogs trailed 8-1 heading into the bottom of the seventh, but put together a late charge to make things interesting.

They scored twice in the bottom of the seventh inning, four times in the eighth, and once more in the ninth to cut it to 10-8. They got the tying run to the plate, but Marshall Gilbert struck out looking to end the game.

Mississippi State finished fourth overall in the SEC standings and earned a first-round bye in the conference tournament. It will play the late game Wednesday, at approximately 9 p.m., against the winner of Tuesday’s single-elimination game between South Carolina and LSU.

Zack Davis singled in a pair of runs during a six-run seventh inning, and UAB beat Southern Miss in the regular-season finale at Pete Taylor Park.

Southern Miss (34-19, 20-10) lost its third consecutive conference series and has dropped six of its last 10 games overall. The Golden Eagles will still be the No. 2 seed for the C-USA Tournament that starts in Biloxi on Wednesday, but will have to win it to qualify for the NCAA Tournament.

Southern Miss will play Rice in the first round Wednesday at 12:30 p.m. Rice took two out of three from USM last weekend in Houston.

“It’s that simple,” Southern Miss coach Scott Berry said. “I don’t think there’s any other choice. If we want to continue to play after the (C-USA) tournament, we’re going to have to win it, because we are not worthy of an at-large (bid). So, we know what we have to do, and that’s half the battle sometimes when you don’t know, if you’re on the bubble. But it’s pretty evident we’re going to have to win that.”

One bright spot for Southern Miss on Saturday was junior right fielder Matt Wallner. He hit two home runs — a solo shot in the first inning and a two-run bomb in the ninth — to set the school’s career record.

Wallner’s ninth-inning home run was the 54th of his career, one better than Marc Maddox’s total from 2003-06.

Wallner also walked twice and was hit by a pitch Saturday, marking the second consecutive day he had reached base five times. He scored three times and knocked in three runs.