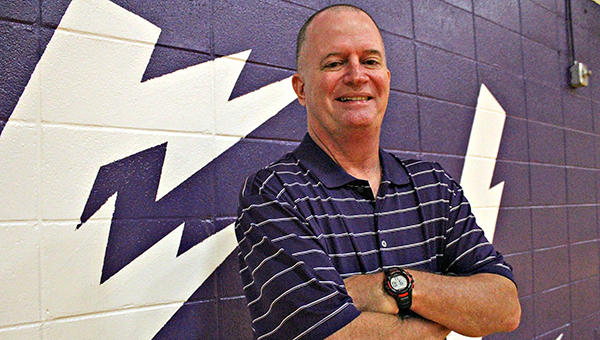 Mike Coleman has been hired as the girls basketball head coach at St. Aloysius. Coleman coached at Vicksburg High from 2000-05, and was most recently the girls coach at Clinton High School the past four seasons. (Ernest Bowker/The Vicksburg Post)

During long coaching careers that often saw them crossing paths as opponents, Mike Coleman and Eddie Pickle developed a healthy respect for each other and a strong friendship. They even talked about working together someday.

It took 32 years, but someday is finally happening.

Coleman has been hired as the new girls basketball head coach at St. Aloysius, where he’ll join his friend and boys coach Pickle. Coleman will also be an assistant for Pickle’s boys team, and vice versa.

“Coach Pickle and (St. Al football coach Michael) Fields started talking to me a little bit and that was a huge factor. I’ve known Coach Fields for probably 31 years now, and Pickle for about 25 years. We’re all good friends and that was a big factor,” Coleman said. “We’ve talked about coaching together for years and it finally happened. Me and Coach Fields have coached together for 12 years already at Utica and Raymond. We’ve been talking about this since (Pickle) was at Crystal Springs and I was at Raymond the first time back in the 90s. It’s finally happened. I think it’s going to be fun.”

Coleman is also longtime friends with Fields, St. Al’s football and track coach, but Pickle said bringing Coleman into the fold was more than just giving a buddy a job.

In 32 years — all but the first as a girls coach — Coleman has a 588-368 record at Utica High School, Raymond, Vicksburg High, Quitman and Clinton. He led Raymond to the 2015 Class 4A championship and has taken five other teams to the state semifinals.

Coleman spent the past four seasons at Clinton. After finishing 14-15 in the 2015-16 season, the Lady Arrows were 62-28 the past three years. Despite that success, his contract was not renewed for the 2019-20 school year.

After a round of phone calls and recommendations among Pickle, St. Al athletic director Mike Jones and incoming principal Karla McHan, Coleman was offered the job and accepted.

Besides a chance to work with friends, Coleman said he was looking forward to ending a state of semi-retirement. The 56-year-old has been retired from teaching for four years and was just coaching basketball at Clinton. Despite a lighter workload, he said he missed being involved with the school on a day-to-day basis.

Coleman will teach physical education and health classes at St. Al.
Since St. Al is a private school and not part of the Mississippi Department of Education, he’ll also be able to continue working while still drawing his state retirement.

“I’ve been retired for four years and just coaching, so I can come back and work in the school and still have benefits and draw on my retirement and everything,” Coleman said. “I think it’s going to be good to get back involved with the school instead of just showing up and coaching. When I was at Clinton, about all I knew was maybe my basketball team and a few more of the athletes. I didn’t know any of the students hardly or the faculty or anything. It’s time to be part of the family again.”

Coleman will have a challenge on his hands at St. Al. The Lady Flashes did not win a game last season and only won once the season before that.

He wasn’t scared off by it, though, since it’s a situation he’s been in before. His first teams at Clinton and Vicksburg had both been gutted by graduation. At Quitman, the Lady Panthers went 2-24 the year before he got there and had an average margin of defeat of 33 points. They went 69-16 his last three years there.

“The only situation I went into that was ready made was the second time I went to Raymond for the 2012-2013 season. They hadn’t been to the Coliseum for a couple of years before that, but they were just loaded with talent. Really, everywhere else I’ve been has been kind of a building process,” Coleman said.

Coleman also pointed to his tenure at Quitman as a rough blueprint for his plans for St. Al. He said an emphasis on developing young players, with more of an eye on long-term results than immediate gains, will pay dividends down the road.

“Quitman hadn’t won a game the year before I got there and we built. It took a couple of years. The first year we only won one game, the next year it was seven, and after that we started winning 20-something games a year,” he said. “We started with developing the younger kids. You have to start with the younger kids to develop a program, and it seems like Coach Pickle has laid a good foundation.”