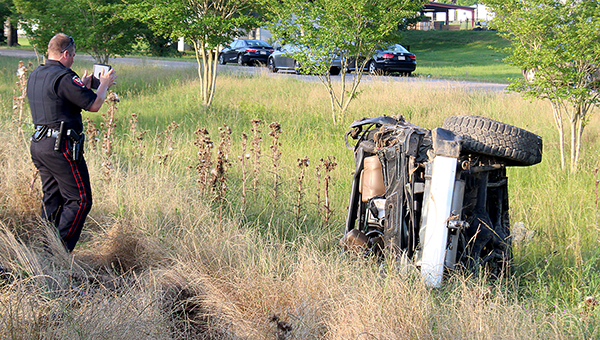 A Vicksburg Police officer uses a tablet to take video at the scene of a one-vehicle fatality on U.S. 61 South south of the Vicksburg Municipal Airport. An Ohio man was killed when his vehicle left the road, struck an embankment and tumbled end over end. (John Surratt | The Vicksburg Post)

An Ohio man was killed in a one-vehicle wreck Monday evening on U.S. 61 South, south of the Vicksburg Municipal Airport.

Vicksburg Police Sgt. Bobby Jones said Mark Owens, 50, of Marietta, Ohio, was northbound on U.S. 61 South when the vehicle he was driving went off the highway on the left side of the road, struck an embankment and went airborne, tumbling end over end and ejecting him.

The cause of the wreck remains under investigation.