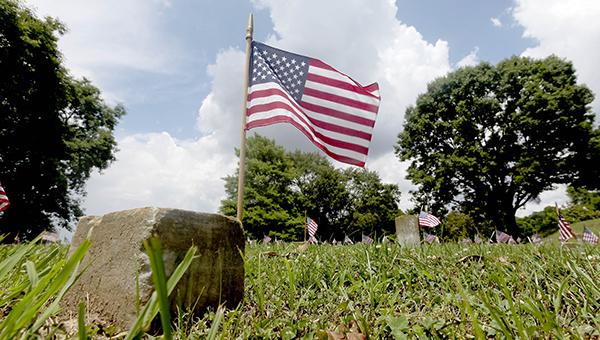 From the placing of flags at the National Cemetery at Vicksburg National Millitary Park to Monday’s annual Memorial Day Parade through downtown, the Memorial Day weekend in Vicksburg offers plenty to see and do.

For the men and women who gave their lives in service to the nation, a day has been set aside to honor them.

Originally named Decoration Day, which was begun to commemorate the deceased of the Civil War, Memorial Day was officially proclaimed on May 5, 1868.

It was first observed on May 30 and is now celebrated on the last Monday in May.

To honor those who made the ultimate sacrifice, several events have been planned throughout the holiday weekend in Vicksburg.

Beginning Friday, flags will be placed at each headstone at the Vicksburg National Park National Cemetery. To aid in the placing of flags, the VNMP is seeking volunteers to help. Work will begin at 7 a.m. at the cemetery and continue until each headstone has a flag accompanying it.

On Saturday, with the support of the Friends of Vicksburg National Military Park and Campaign and the Four Seasons of the Arts, the Mississippi Symphony Orchestra, under the direction of maestro Crafton Beck, will present a free concert beginning at 7 p.m. at the Visitor Center. The concert will feature pops and patriotic music, and after a brief intermission, the symphony will perform musical selections in recognition of the 300th anniversary of the first settlement at Vicksburg in conjunction with the Saint Pierre Tercentennial Commission.

President of the Mississippi Symphony Orchestra Michael Beattie said selections for the second half of the concert, will include “Solace” by Scott Joplin, a Beach Boys Medley arranged by Calvin Custer and “Stars and Strips Forever” by John Philip Sousa.

Guests wishing to attend the concert should park at the Vicksburg Outlet Mall and use the free shuttle to access the symphony.

Shuttle service will begin at 5 p.m. Handicapped parking, only will be available at the visitor center. Also, concertgoers are asked to bring their own lawn chairs and blankets.

On Monday, a Memorial Day Parade will roll along Washington St.

A memorial service will follow at the Vicksburg Auditorium, 901 Monroe St.

The Rev. Bruce Wells will give a Biblical message, Glasper said, and American Legion Commander Pat Baughman will serve as the keynote speaker.

At 1 p.m. the National Park Service in conjunction with American Legion Post 3, American Legion Post 213, Veterans of Foreign Wars Post 2572, Military Order of the Purple Heart, and Warren County Sheriff’s Office, will host a remembrance event, including a flag-raising ceremony at the Vicksburg National Cemetery. Parking in the cemetery will be limited to those with limited mobility. General parking will be available at the USS Cairo Museum, which is a short walk to the cemetery site.

Following the remembrance event in the park, a free meal will be offered at American Legion Allien Post 3, 1712 Monroe St., Glasper said.