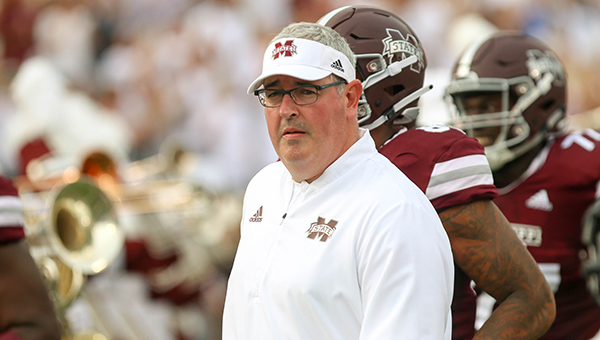 Mississippi State has given football head coach Joe Moorhead a contract extension through the 2022 season. The new contract will pay him an average of $3.2 million per season. (Walter Frazier/For The Vicksburg Post)

The school announced Tuesday that he has signed a contract extension through the 2022 season that will pay an average base salary of $3.2 million. Moorhead originally signed a four-year deal worth an average of $2.75 million when he was hired following the 2017 season.

Moorhead’s new deal is also four years, which is the longest allowed by state law.

Mississippi State is coming off an 8-5 season, including a 4-4 mark in the Southeastern Conference and a loss to Iowa in the Outback Bowl. The Bulldogs had one of the nation’s best defenses but struggled at times on offense.

“For me, it’s about building a championship program our Bulldog fans can be proud of and helping our players maximize their potential on and off the field, while walking away with a meaningful degree from Mississippi State University,” Moorhead said in a statement released by the school. “Our team is excited about the season ahead, and I look forward to continuing to elevate our program in everything we do.”

Mississippi State’s problems on offense were somewhat surprising considering Moorhead’s background is on that side of the ball. He led Penn State’s offense to two successful seasons before becoming Mississippi State’s head coach.

Moorhead said he’s hopeful the offense will improve next fall since players have had more time to learn his system. The Bulldogs recently added Penn State transfer Tommy Stevens to compete with Keytaon Thompson for the starting job at quarterback.

Nick Fitzgerald, a three-year starter at quarterback, finished his career and has since signed with the Tampa Bay Buccaneers as an undrafted free agent.
Fitzgerald set the SEC record for rushing yards by a quarterback, with 3,607, and also ran for 46 touchdowns. He led all Football Bowl Subdivision quarterbacks with seven 100-yard rushing games.

The defense must rebuild after three players — defensive linemen Jeffery Simmons and Montez Sweat and safety Johnathan Abram — were selected in the first round of the NFL draft in April.

“He is driven by elevating our program to a championship standard on and off the field,” Cohen said. “We look forward to watching the continued growth of our football program under his watch.”

JACKSON — Jake Mangum, one of the best college baseball players this century in the state of Mississippi, insisted there... read more