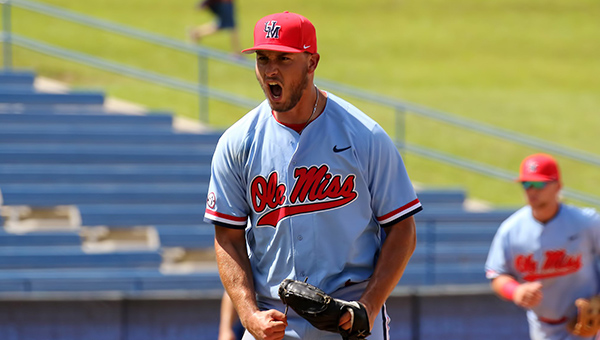 Ole Miss pitcher Will Ethridge reacts after getting out of an inning during Tuesday’s SEC Tournament opener against Missouri. Ethridge allowed one run in seven innings to lead the Rebels to a 2-1 victory. (Ole Miss Athletics)

HOOVER, Ala. (AP) — Ole Miss, for one day at least, solved its bullpen woes and the slump that threatened to derail its season all in one shot.

Will Ethridge allowed one run in seven innings and Ole Miss beat Missouri 2-1 on Tuesday in the first round of the Southeastern Conference Tournament.

Missouri (34-22-1) was knocked out in the tournament’s single-elimination round for the second year in a row. Defending champion Ole Miss (34-23) advanced to the double-elimination portion of the tournament and will play No. 2 seed Arkansas Wednesday at 1 p.m.

“It was just a tremendous college baseball game. We said so much this year, to our team, it takes all kinds (of wins). Certainly, today was one of those pitching and defense kind of games,” Ole Miss coach Mike Bianco said. “And there’s not a better guy on the mound for us than Will Ethridge to pitch in that type of game.”

Ethridge (6-6) allowed seven hits, but struck out six and didn’t issue a walk.
Tyler Myers struck out the side in the eighth for Ole Miss and Ryan Olenek pitched a scoreless ninth for his second save in as many games.

Olenek also started in center field and had two hits, then struck out Thomas Broyles looking to strand a runner on second and end the game.

Ole Miss’ bullpen had given up several late leads during a six-game losing streak late in the regular season. Olenek pitched the ninth in the finale against Tennessee, a 5-4 victory, and protected another lead on Tuesday.

“I just throw strikes. I just have the mentality to throw strikes,” Olenek said. “You just prepare like you would for anything. It feels good to be out there and I love being out there and having the opportunity to do it. I just try to take advantage of it.”

Austin James’ RBI double in the second inning gave Missouri a 1-0 lead, but Ole Miss rallied for its 15th come-from-behind win of the season.

A leadoff double by Jacob Adams in the fifth inning quickly paid dividends after Thomas Dillard followed it with one of his own, into the left field corner. Adams scored to tie the game at 1.

After a sacrifice bunt by Grae Kessinger moved Dillard to third base, Cole Zabowski gave the Rebels the lead with an RBI single into center.