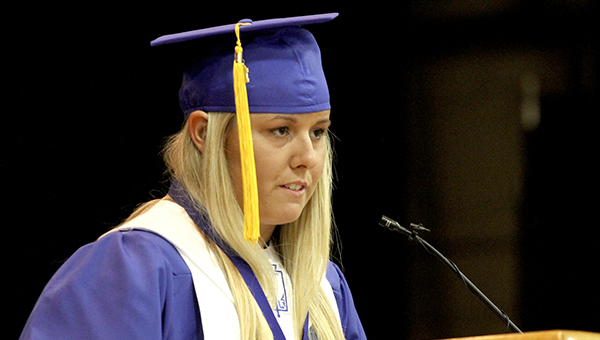 Achieving the title of valedictorian is no easy feat.

Constant dedication and focus are required to even get halfway to the top, which means absolute dedication is necessary reach the top of the list. As the city of Vicksburg hosts graduation ceremonies, the valedictorians of each high school admit that although the title is an honor, it also took a lot of hard work.

At Porters Chapel Academy, Hannah Ashley earned the title of 2019 valedictorian after attending the school for only two years.

“It’s a relief to be named valedictorian, because I was competing with another student and we were really close,” Ashley said. “It was just a big relief to know that I’d gotten it, and I’m ecstatic.”

In those two years, she played on the soccer field, softball field and participated in numerous clubs including Key Club, Student Council and the National Honor Society. Besides her extracurricular activities, she competed with all of her classmates academically to become valedictorian.

She owes it all to her parents.

“My mom and dad have definitely been my biggest supporters my whole life,” Ashley said. “They’ve just always encouraged me to work as hard as possible my whole life, especially while I’m in school so that I don’t have to struggle with anything.”

During her senior year at PCA, Ashley made the decision to attend Mississippi State University, where she plans to major in business administration.

“I love math,” she said. “So, I decided that business administration was a pretty general major for me to go into so that I could decide what I wanted to go into from there.”

Though her journey to valedictorian seemed effortless, she admits there were challenges she had to learn to overcome.

“I have pretty bad test anxiety,” she said. “It’s always been a struggle to study and stuff but I just had to figure out how to study in a way that is effective for me and so now I use flashcards. Once I got into that, studying has been a breeze.”

To all of the students in high school working to achieve their high school diploma, Ashley encourages them to work hard and stay focused.

“Definitely study and do all of your work,” she said. “Don’t really let the party life get involved because this is the biggest moment and you have to succeed during your high school years to get anywhere else.”