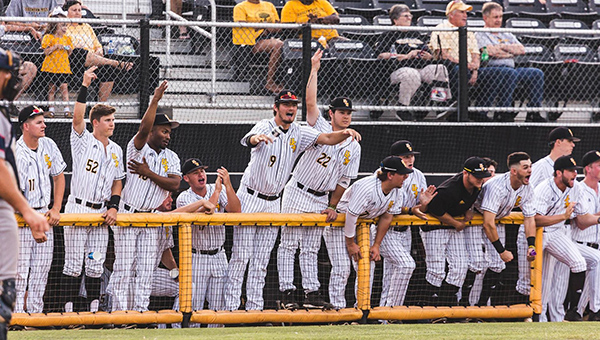 Southern Miss players cheer on their teammates during a game this season. The Golden Eagles will face Rice Wednesday afternoon in their Conference USA Tournament opener. (Joe Harper/Southern Miss Athletics)

JACKSON — The bad news for Southern Miss is that it has boxed itself into a single, difficult path to the NCAA Tournament.

The good news is, the Golden Eagles know exactly what it is.

A late-season slide has put Southern Miss in a position where an at-large bid to the NCAA Tournament is a long shot. It’ll have to win the Conference USA Tournament this week in Biloxi to earn the league’s automatic bid and reach the Big Dance for the fourth year in a row.

“It’s black and white, so that’s got to be our mentality. We’ve got to carry it through,” Southern Miss right fielder Matt Wallner said.

Southern Miss finished April with a sweep of Middle Tennessee and started May with a midweek victory over Ole Miss. Since then, it’s been a slog.

The Golden Eagles lost two of three in a crucial series with Florida Atlantic — which went on to win the regular-season C-USA championship and is the No. 1 seed in the tournament; Southern Miss is the No. 2 seed — and things didn’t get better after that.

Series losses to Rice and UAB, the latter of which did not even qualify for the C-USA Tournament, followed.

In all, the Golden Eagles lost six of their last 10 games. Their RPI slid to No. 56 in the country heading into the conference tournaments. Any team outside the top 40 is considered on the bubble for the NCAA Tournament, and anyone outside the top 50 rarely makes the 64-team field as an at-large bid.

Given that scenario, winning the C-USA Tournament is essentially a requirement on two fronts for the Golden Eagles. If they win it, they’ll receive the league’s automatic bid to the NCAA Tournament and their RPI would benefit from a few more wins. If they lose, especially early, their RPI won’t recover enough to lift them into the discussion for an at-large bid.

“I think you know what you have to do,” Southern Miss coach Scott Berry said. “I really don’t know what our RPI is. I don’t ever check it. But I would think with us losing those series it can’t be good enough for us to get in as an at-large. So we know what we have to do, and if we’ve got to win the tournament then that’s what we’ve got to do.”

To win the tournament, the Golden Eagles must first put their recent slump behind them. It’s hard to pinpoint any one thing that’s gone wrong. They scored two runs in two losses at Rice, and have lost two games in which they scored in double digits during the skid.

Berry said it’s been a combination of things that simply boils down to playing subpar baseball.

“We have not played good enough baseball down the stretch,” Berry said. “We went through some rough patches early, and I was hoping that had been the test that we had come out of on the other side. And at one time we did. We reeled off nine straight wins. But we’re not getting the big hits when we have to. Some games we’re not running the bases, we’re not doing the fundamental things that allow you to win games. Until we can clean those up, we’re going to struggle.”

One way to flush it is to look at the end of the regular season and the start of the postseason as a clean break, Wallner said. The Golden Eagles aren’t a bad team, just one having a bad time of late.

“I think everybody knows that. We just need to get that mentality back and that confidence back is the biggest difference,” Wallner said. “I think we’re just pressing a little bit too much. I hope that Wednesday the season starts over and we get back to how we were playing in the middle of the year and to start the year. We just need to push the restart button and go from there.”

The Golden Eagles can draw on their success in the Conference USA Tournament, and in Biloxi in particular, for an extra edge. They’ll enter this year’s tournament as the defending champions, reached the championship game the first year it was played at MGM Park in 2017, and also won it in 2016 when it was played in Hattiesburg.

Overall, Southern Miss is 10-4 at MGM Park since it opened in 2015, and 8-3 in Conference USA Tournament games played there. Located about 90 minutes away, Southern Miss has a decisive home field advantage even though Biloxi is officially a neutral site.

“It’s no secret that we draw the best in the conference and even when we’re down there it’s basically a home game for us, so that’s huge,” Wallner said.
On Wednesday, Wallner and pitcher Walker Powell were named first-team All-Conference USA, while Hunter Slater, Gabe Montenegro and Bryant Bowen all earned second-team honors.

Wallner batted .315 with 12 doubles and 19 home runs to go along with 51 RBI. He became the school’s all-time home run leader last Saturday, with 54 for his career.