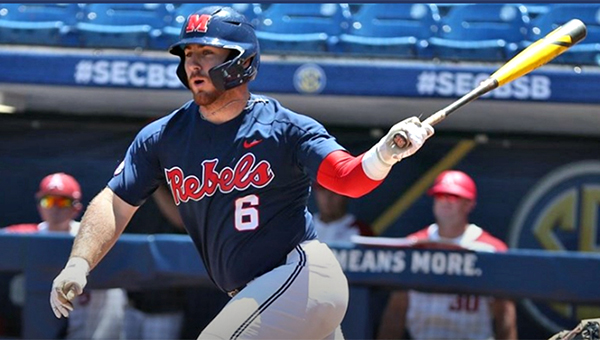 HOOVER, Ala — It wasn’t for lack of opportunity, but Ole Miss is no longer in the winners’ bracket of the Southeastern Conference Tournament.

Jack Kenley drove in three runs, including two with a go-ahead single in the sixth inning, as second-seeded Arkansas beat Ole Miss 5-3 on Wednesday.

Ole Miss stranded nine base runners and was just 1-for-12 with runners in scoring position.

“We just had a few opportunities offensively that we didn’t capitalize on, especially early,” Ole Miss coach Mike Bianco said. “We just didn’t have enough good at-bats to score. Not trying to take credit away from Arkansas, that’s why they’re so good. To beat them, you have to play better than that.”

Texas A&M lost 2-0 to Georgia on Wednesday, when Cam Shepherd hit a two-run, walk-off home run with two outs in the ninth inning.

This is a familiar position for Ole Miss. It lost in its first game of the double-elimination round in last year’s SEC Tournament and then came back through the losers’ bracket to win it.

Thomas Dillard went 2-for-5 with an RBI, and is thriving in his new role as Ole Miss’ leadoff man. In four games at the top of the order, he is 9-for-16 with two walks and two RBIs.

However, as a team, the Rebels have struggled offensively in the SEC Tournament. Ole Miss has scored five runs in two games, is batting .234 as a team and has left 17 runners on base.

“I just think we can be a little bit tougher and believe in ourselves more,” Dillard said. “We have great guys one through nine in our lineup and even after that. We just have to want to be the guy to go out there and want to get that hit.”
Just like their first game in Hoover, the Rebels didn’t get on the board until the fifth inning on Wednesday.

The bottom of the order did its job in the fifth, with Anthony Servideo and Justin Bench reaching base with one out to start the rally. Dillard continued his hot streak, driving in Servideo before Grae Kessinger brought in Bench to tie the game at 2-2.

Ole Miss went up 3-2 the next inning behind an RBI ground out from Kevin Graham.
Arkansas didn’t take long to get that run back, chasing Ole Miss pitcher Zack Philips out of the game with the go-ahead runs in the sixth inning.

Pitching really well through five, Phillips gave up a handful of hard-hit balls in the sixth, including a foul ball by Casey Martin that traveled about 400 feet.

The Razorbacks ran Phillips off the mound after scoring two on Kenley’s single to go ahead 4-3. Arkansas added another run in the eighth inning on an RBI ground out by Kenley, off of reliever Austin Miller.