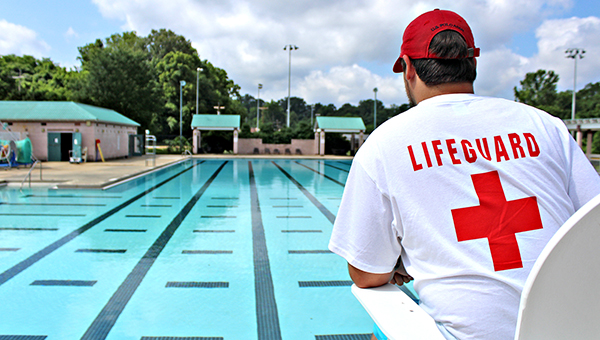 Rob Sanders, the head lifeguard at City Pool, looks out over the water. City Pool will open for the summer season on Monday. (Ernest Bowker | The Vicksburg Post)

For weeks, City Pool manager Sylvia Gurtowski has been conjuring up schedules and contingency plans to keep the facility operating in the face of a lifeguard shortage.

It’s just about time to put them all into action.

City Pool will open for the summer season on Monday with a new schedule and slightly different hours, but still the same opportunities for Vicksburg residents to enjoy a splash of fun.

Family swim time will also be limited to Tuesdays and Thursdays, from 5:30 to 7 p.m., on weeks where swim lessons are not held.

That schedule will begin on June 3. Next week, the pool will be open for recreational swimming on Monday, Tuesday and Thursday from 1 to 5 p.m. It is closed to the public May 31 through June 2 for the annual Stamm Family Invitational Swim Meet.

“We know some people aren’t going to be happy and some people are going to be very happy,” Gurtowski said. “We have safety first and foremost in mind, and we want to give the best services we can, and the services the public has become accustomed to, as long as our staff allotment allows.”

The changes are to help City Pool compensate for a shortage of certified lifeguards. Only 12 lifeguards — half of whom are part-time — have been hired for the summer. Gurtowski said she needs about 25 to fully staff the pool, and hiring more isn’t as easy as placing a want ad.

Lifeguards must pass a three-week American Red Cross certification class that is only offered locally in April each year.

City policy is also to hire only those applicants 16 and older, which further narrows the pool of potential lifeguards. Throw in vacations, sports and other summer jobs that demand teenagers’ time, and Gurtowski said it’s become more and more difficult each year to have a full staff.

“It’s not just us. It’s nationwide. Some pools in Jackson are closing because they can’t find lifeguards,” Gurtowski said.

Gurtowski, though, said she has made some plans for how to deal with the dwindling number of lifeguards.

A new chair was installed that gives lifeguards a better vantage point over the entire pool.

The layout of the pool also allows the staff to close off certain sections depending on how many lifeguards are on duty, which allows them to contain the crowd to a smaller area.

“As long as we have six guards on duty, we can open all the sections of the pool. If we have less than six, we’ll close the deep end,” Gurtowski said. “We have plans for all the way down to two guards. We’re not going to be running around wondering what to do.”

Strelzoff’s STAR is a credit to her hard work

Merriam-Webster defines dedication as self-sacrificing devotion and loyalty. For Laurel Strelzoff this is what made it possible for her to... read more