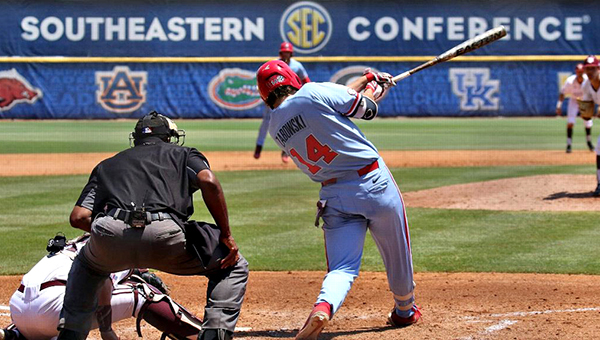 Ole Miss’ Cole Zabowski connects for an RBI double in the ninth inning of Thursday’s SEC Tournament game against Texas A&M. It was one of only two hits the Rebels got in the game, but they won 1-0. (Courtesy of the Southeastern Conference)

When it was over, the Rebels were ready to kiss Cole Zabowski.

Zabowski ripped an RBI double into the right field corner in the top of the ninth inning to bring in the game’s only run, and the Rebels beat Texas A&M 1-0 in an SEC Tournament elimination game on Thursday.

Ole Miss (35-24) did not get a hit until the ninth inning, then put together the winning rally to stay alive. It will play Arkansas in another elimination game Friday at 3 p.m.

“It was a vibe like ‘I think we’re going to get this done,’” Zabowski said. “We’re all fighting every at bat. Of course you want to score five, you want to score ten off this guy. But the most you can do is fight and put runners on and try to make something happen.”

There has never been a no-hitter in the SEC Tournament, but Doxaxis came close. He struck out 10 batters, retired 24 of 27, and did not allow a hit through eight innings.

That type of pitching effort gave the Aggies (37-21-1) a great matchup against a team struggling mightily at the plate. As a team, Ole Miss is hitting just .191 (17-of-89) and scored six runs through three games in Hoover.

Luckily for the Rebels, they got a pitching gem of their own. Freshman Doug Nikhazy allowed three hits and walked four in eight shutout innings. He struck out two.

“It was just a gutsy, tremendous performance by Doug,” Ole Miss coach Mike Bianco said. “We talk so much about this league and competition. In game three you face a team that’s ranked in the top 20 and throws a first-rounder and the guy threw a no-hitter through eight. It’s just a game where you have to get a couple of hits and we got two hits in one inning.”

Both of those hits came in the ninth inning, after Doxaxis left the game. With Doxaxis’ pitch count at 99, Texas A&M coach Rob Childress went to the bullpen and brought in Bryce Miller.

Ole Miss’ Thomas Dillard immediately broke up the no-hitter with a single to left field, and then went to second base on a balk. With two outs, Zabowksi lined a double down the right field line and into the corner, bringing in the game’s first — and only — run.

“He was at a hundred pitches, he did more than we needed him to do, more than we asked him to do, just like he has all year long. He’s going to be on the mound for us in eight days as well, and that’s where the decision was made,” Childress said of pulling Doxaxis. “It was a hard decision to make but it was the right decision in our team moving forward.”

Nikhazy was also pulled for the ninth inning, but Ole Miss’ beleaguered bullpen was able to hold the lead. Closer Parker Caracci allowed a one-out double to Hunter Coleman, but got Mikey Hoehner to fly out to left field and struck out Jonathan Ducoff to earn his ninth save of the season.

Texas A&M became the first team in SEC Tournament history to get shut out in back-to-back games. All three of its games were decided in the final at-bat. The Aggies beat Florida in 10 innings, then lost 2-0 to Georgia on Tuesday on a walk-off home run in the ninth — in a game where their starter Chris Webber took a no-hitter into the eighth inning.

“Well, certainly disappointed,” Childress said. “We came here to win the tournament, we had two amazing performances on the mound, and we had around 13 or 14 opportunities with runners to score in position but weren’t able to cash in.”