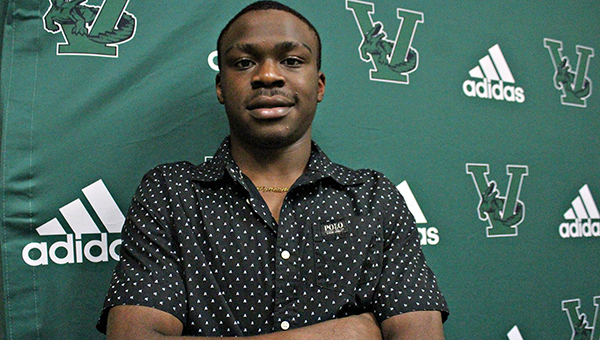 Then, regretfully, he points out one negative that has been holding Brown back.

That is, of course, a nice way of saying the 5-foot-10 Brown is short, at least by basketball standards. Luckily, he found someone willing to overlook it.

Brown recently signed with Meridian Community College, where he’ll get a chance to play on a bigger stage and grow his game.

Carter is always happy to see one of his players move on to the college ranks, but said it was especially satisfying to see Brown do it. Brown worked his way up the depth chart to average 9.5 points and 1.3 assists per game over the past two seasons.

“It’s very cool, and it’s satisfying. Especially in Jermiyah’s case, because everybody that was recruiting him was on the size thing,” Carter said. “He’s a pit bull, but everybody’s looking for 6-2 or 6-3 guards. If he has the opportunity to prove himself and take care of his business, I believe he can show Meridian that he can be that guard. He works hard.”

Carter said it was that work ethic that allowed Brown to get to the next level. Brown ran cross country last fall to work on his endurance, and spent extra time in the gym to develop a better shooting stroke.

Brown raised his scoring average by three points per game from the 2017-18 season to the 2018-19 season. He made fewer 3-pointers as a senior, but his percentage on shots from inside the arc went from 56 percent to 62. His free throw percentage took an even bigger leap, from 48 percent as a junior to 74 percent as a senior.

“He really worked on his shooting. He came in early, stayed a little bit late. He ran cross country — Ty’Ron (Moore) did too — and that really helped them. That four-quarter endurance is what you really need to finish these games,” Carter said. “He needs to work on his I.Q. a little bit more. If he just gets a little bit smarter about how he handles that basketball and distributes it to other players, he’ll be in good shape.”

Brown is the fourth player from this year’s VHS roster to sign with one of Mississippi’s junior college. Forward Jamison Norfort signed with Holmes. Guards Devan Kiner, Ty’Ron Moore and Brown all signed with Meridian.

“We’re working. We’re trying to pick up where the big fella left off in (former) Coach (Dellie C.) Robinson,” Carter said. “We’re just trying to get these guys into schools, and we’ve got a good group coming. It’s super satisfying to see guys get the opportunity to move on and play basketball past high school. That is a hard task to achieve.”