It’s never too early for Supper on the ‘Sip information 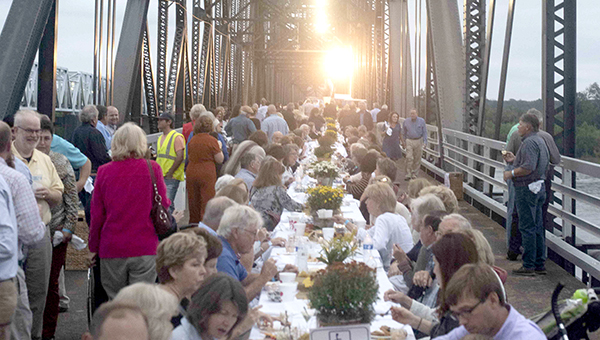 Last year, the United Way of West Central Mississippi’s inaugural Supper on the ‘Sip was an overwhelming success.

Hundreds gathered on the Old Mississippi River Bridge to enjoy music, food and an amazing view, which was all part of the United Way’s kickoff for its annual fundraising campaign.

“It was more than I could have ever imagined,” United Way Director of Marketing and Community Relations Kami May said of last year’s event.

Because of its success, May said, the second annual Supper on the ‘Sip is already on the books  for Thursday, Sept. 26. Beginning in July, tickets will go on sale for leadership members.

Those who would qualify as leadership members, May said, are those who give $500 or more a year to the United Way of West Central Mississippi.

“We are doing things a little differently this year,” May said. “Last year we started selling tickets the first of August, and they went very quickly. So this year, we want to make sure our leadership givers, the ones who are truly vested in the United Way, are able to get tickets for this event.”

Therefore, tickets will go on sale beginning July 1 for anyone who is a leadership member.

Leadership tickets will be sold in tiers beginning with those who have contributed the most to the local organization, May said. All leadership members will be contacted by the United Way with ticket information.

Tickets for the general public will go on sale beginning Aug. 1, and will be sold through eventbrite.com.

Last year, only 500 tickets were available for the event, but May said they are hoping to have more this year.

“We are hoping to get more restaurants on board,” she said, which would then allow for more ticket sales.

May said any restaurant interested in participating in this year’s event should call 601-636-1733.

More than $20,000 was raised during the inaugural Supper on the ‘Sip, with all proceeds going directly to United Way agencies that participated in the event.