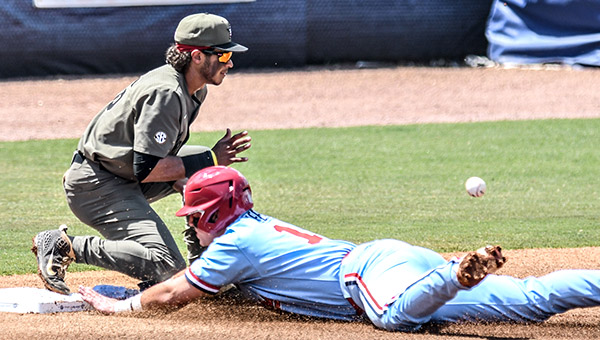 It was quite pleased, however, with the consolation prize.

About an hour after the Rebels lost 11-10 to Vanderbilt in the SEC Tournament championship game on Sunday — after squandering an early eight-run lead — Oxford was selected as one of 16 regional host sites for the NCAA Tournament.

The regional sites were announced Sunday. The rest of the 64-team tournament field will be unveiled Monday at 11 a.m. on ESPNU.

Ole Miss lost six consecutive games at the end of the regular season, but rebounded nicely in Hoover. It went 4-2 in the SEC Tournament and reached the championship game for the second year in a row.

“Nobody really expected us to be here. We kind of skated at the end of the year. It just showed the heart that our team has. We had to play six games in six days to get here,” said Ole Miss junior outfielder Thomas Dillard, who was named to the all-tournament team. “To jump out on a great Vanderbilt team like that, I think shows a lot about our team. I’m really proud of them. I think we fought as hard as we could. Made it to the last pitch of the game just came up a little short but really proud of our team this week.”

Six of the 16 regional hosts announced Sunday are in the Southeastern Conference. Mississippi State, LSU, Georgia, Vanderbilt and Arkansas will also host in addition to Ole Miss.

All of the regional hosts are in the NCAA Tournament, which begins Friday.

Ole Miss (37-25) entered the SEC Tournament not just on the edge of the regional host discussion, but possibly on the bubble for the NCAA Tournament as well. It started the week ranked 31st in RPI, but shot up to No. 22 with its run to the championship game.

Ole Miss played 41 games against the RPI top-50 this season, more than any other team in the nation. In its run through the SEC Tournament, Ole Miss beat No. 3 Georgia and Arkansas No. 7 Arkansas.

“It’s been an incredible week for us. They’ve played well all week — including today,” Ole Miss coach Mike Bianco said after Sunday’s game against Vanderbilt. “One of the challenges is to get through this gauntlet of a tournament and get to this point. They gave it everything they had and left it out on the field.”

The loss to No. 2 Vanderbilt (49-10) didn’t affect Ole Miss’ regional host standing, which was a good thing. The Rebels jumped out to a 9-1 lead through 2 1/2 innings, then only scored one more time and watched the Commodores eat up more and more of the distance as the game wore on.

Vanderbilt scored twice in the bottom of the third and five times in the fourth — Pat DeMarco hit a three-run home run — to quickly cut it to 9-8.

The teams traded runs in the fifth inning and then Vanderbilt tied it 10-10 in the sixth on an RBI double by Harrison Ray.

“Nobody really thought about (folding). I think we wanted to play this game, and we wanted to win this game. Packing it in for the NCAA’s was never a thought for everybody,” said Ray, who finished 3-for-5 with one RBI and two runs scored, and tied a single-game tournament record with three doubles. “I think the biggest thought was just that we were just going to chip away at this lead. We were going to stay together just one by one. We were going to do it every inning. We were just going to try to get back in it as best we could.”

The game stayed tied until the bottom of the ninth, when the Commodores rallied with two outs. Three consecutive walks loaded the bases and brought Philip Clarke to the plate.

Clarke hit the first pitch he saw from reliever Ryan Olenek back up the middle to bring in Austin Martin with the winning run and give Vanderbilt its first SEC tournament championship since 2007.

It was the fifth game of this tournament decided by a walk-off hit. It was also the first championship game decided with a walk-off hit since 1983.

The eight-run deficit was the second-largest comeback in SEC Tournament history.

“I didn’t come through in the bottom of the seventh, so I felt like I needed to in the bottom of the ninth,” Clarke said. “I got with (assistant coach Mike) Baxter, went over the scouting report. We didn’t have much info on (Olenek). I was just looking for a pitch to hit, got one, and put a good swing on it.”

For Ole Miss, Bianco said he was still proud of what the Rebels accomplished with a pitching staff and roster worn out from playing its sixth game in six days.

“I don’t know how many people we didn’t use, just about the whole roster today, and I’m just proud,” Bianco said. “It’s a really good team. The dugout on this team has played really well. It’s unfortunate. I tell them all the time that losing stinks but really just proud of the way not only that they played this week but today as well.”