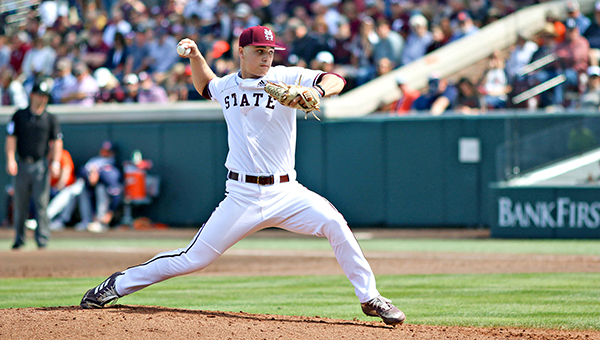 Mississippi State’s J.T. Ginn pitches earlier this season. The Bulldogs will host a regional in the NCAA Tournament beginning on Friday. They’ll face Southern University in the opener, while Central Michigan and Miami play in the other first-round game. (Walter Frazier/For The Vicksburg Post)

One portion of the road to Omaha will take the long way through Starkville.

Mississippi State was selected as the No. 6 national seed when the 64-team field for the NCAA Tournament was unveiled Monday, meaning the Bulldogs will host both a regional this weekend and a super regional if they can get there.

It’s only the second time — both in the past four seasons — that Mississippi State (46-13) has earned one of the top eight national seeds. Mississippi State is making its 38th NCAA Tournament appearance and hosting a regional for the 14th time.

The Bulldogs went 32-5 at Dudy Noble Field this season, and center fielder Jake Mangum said they expect to enjoy a weekend filled with home field advantages.

“It’s going to be insane. Our fans are going to show up and they’re going to be extremely loud,” Mangum said on ESPNU’s NCAA Tournament Selection Show. “I think it’s going to be the toughest environment to play in in the country. We were fortunate enough in 2016 to host a regional and a super regional. It was pretty special. And that was in the old stadium. I think this new stadium is going to be unbelievable.”

The Bulldogs’ path to the College World Series begins Friday at noon, when they take on Southern University (32-22) at Dudy Noble Field. The game will be televised on the SEC Network.

The other opening-round matchup in the double-elimination Starkville Regional features Central Michigan (46-12) vs. Miami (39-18) at 7 p.m. Friday. That game will be on ESPNU.

The Bulldogs are among a record-tying 10 teams from the Southeastern Conference included in this year’s NCAA Tournament field, with four selected as national seeds and six as host sites.

Mississippi State lost two of its three games in the SEC Tournament last week, and three of its last four overall coming into the NCAA Tournament.

“We got two off days to rest our bodies a little bit, and we start practice back up (Monday). I think it’s going to be good for us to reset and focus in our sights on this NCAA Tournament run,” said Mangum, who is the SEC’s all-time leader and ranks sixth in NCAA Division I history with 372 career hits.