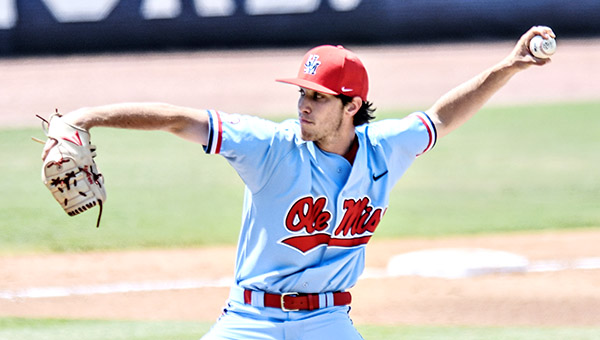 Ole Miss' Zack Phillips pitches against Vanderbilt in the SEC Tournament championship game on Sunday. Ole Miss was one of 16 teams selected to host regionals in the NCAA Tournament. (Bruce Newman/The Oxford Eagle)

Ole Miss couldn’t complete its push for the Southeastern Conference championship, but it did enough to earn a weekend at home.

Ole Miss was selected as one of 16 regional sites for the NCAA Tournament and will welcome Clemson, Illinois and Jacksonville State to Swayze Field for the Oxford Regional.

Getting to host a regional was a reward for a remarkable run in Hoover, Ala., at the SEC Tournament. Ole Miss won four games before losing to Vanderbilt in the championship game on Sunday.

The Rebels jumped from No. 31 in the NCAA’s RPI rankings to No. 22. Their strength of schedule — they played 41 of 62 games against teams ranked in the top 50, more than anyone else in the country — gave them the nod.

Tennessee and Texas A&M were among the SEC teams ahead of Ole Miss in the final RPI rankings that did not get to host a regional.

“Nobody really expected us to be here. We kind of skated at the end of the year. It just showed the heart that our team has. We had to play six games in six days to get here,” Ole Miss junior outfielder Thomas Dillard, who was named to the all-tournament team, said after Sunday’s game against Vanderbilt.

Six of the 16 regional hosts are in the Southeastern Conference. Mississippi State, LSU, Georgia, Vanderbilt and Arkansas will also host in addition to Ole Miss.

Ole Miss not only earned the right to host, it apparently did so fairly comfortably. It is the No. 12 national seed. The top 16 get to host regionals.

The winner of the Oxford Regional will face the winner of the Fayetteville Regional — which includes host and No. 5 national seed Arkansas, TCU, California and Central Connecticut State — in the super regional round next week.

Ole Miss beat Arkansas in the SEC Tournament last week. That is one of five super regionals that could potentially match up teams from the same conference.

Vanderbilt (49-10) has won 22 of its last 23 games and is the first team to sweep the SEC regular-season and tournament championships since it did so in 2007. It won the tournament title by erasing a 9-1 deficit against Ole Miss to win 11-10.

The eight-run deficit was the second-largest comeback in SEC Tournament history. The Commodores capped it with Philip Clarke’s walk-off RBI single in the bottom of the ninth inning.

It was the fifth game of this SEC Tournament decided by a walk-off hit. It was also the first championship game decided with a walk-off hit since 1983.

Ole Miss blew a huge lead and let a second straight Southeastern Conference championship slip through its fingers. It was... read more