Hundreds turn out for symphony 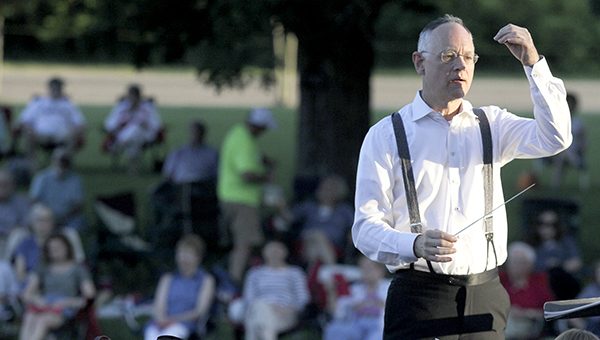 Crafton Beck directs the Mississippi Symphony Orchestra during the Fort St. Pierre Tercentennial Symphony at Sunset at the Vicksburg National Military Park Saturday evening. The concert is held each Memorial Day weekend near the entrance of the park. (Courtland Wells | The Vicksburg Post)

From Birmingham to Baton Rouge, and right here in Vicksburg, locals and tourists alike flocked to the Vicksburg National Military Park to enjoy the seventh annual Memorial Day concert on Saturday.

An estimated crowd of 650 people came to listen and dance as the Mississippi Symphony Orchestra performed at the Park.

“One (group) drove over from Birmingham. They were here by mistake one year and loved it and then came back for this weekend. I talked to another couple that drove in from Baton Rouge for the concert,” said Bess Averett, executive director of Friends of Vicksburg National Military Park and Campaign.

Averett added that the couple from Birmingham even volunteered to help put out flags at the Vicksburg National Cemetery on Friday.

This marked the seventh year that a concert was performed during the Memorial Day weekend at the Vicksburg National Military Park. Last year’s event was canceled because of inclement weather.

The crowds returned this year, from a wide range of both geographical locations and ages. The weekend also kicked off the popular living history summer demonstrations with artillery and cannons.

Averett deemed the event a success, and said the tradition of holding a concert on the Saturday before Memorial Day will continue.

“We had a really good mix of senior couples and young families,” Averett said.

Averett said there was also some dancing going on during the concert.

“There was this one little girl in the back and I think she literally danced from the first song to the last,” Averett said. “She took over the whole back of the grassy area and never stopped dancing. It was really cute to watch.”