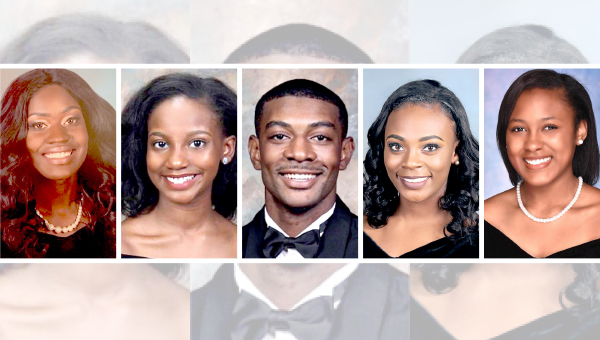 Five graduating seniors with ambitious goals for the future are this year’s recipients of the Frank Crump, Jr. Next Generation Scholarship.

Keanna Abraham, a graduate of Vicksburg High and class valedictorian, received the top award of $1,000. With her sights already set on earning a Ph.D. in engineering, Abraham wants to pursue research in structural and environmental engineering, with a focus on developing more sustainable materials to reduce structural damage and save lives during natural disasters.

Abraham will attend Jackson State University to study civil engineering and environmental science. She will participate in JSU’s 10-week summer bridge program that helps prepare students with their transition and success in STEM degree programs.

Moore plans to study medicine and become an obstetrician/gynecologist. She started paving the way to a career in medicine early on by participating in STEM enrichment programs where she learned about biomedical science. Alyshia will attend Alcorn State University and major in Biochemistry and Pre Medicine. This summer, Moore will participate in the Louis Stokes Alliance for Minority Participation Summer Bridge Program to start her transition to college.

Asia Brown will be attending her dream school, Spelman College in Atlanta, GA, where she will major in Health Science and minor in Public Health. Asia aspires to become an epidemiologist and community health educator, advocating for quality healthcare and programs that meet the needs of underserved populations.

Warren Central High School graduate and STAR Student, Greene is a huge computer enthusiast. His interest in computers started with playing solitaire on his grandmother’s desktop computer at the age of six. He learned to code and develop apps in his junior year in high school. Greene will attend Mississippi State University and major in Computer Science. His goal is to own his own tech company and give others opportunities like the ones afforded to him.

Lumpkin will attend the University of Louisiana at Monroe to study nursing. She is passionate about returning to Vicksburg and serving the community as a Nurse Practitioner.

The Frank Crump, Jr. Next Generation Scholarship is named for educator and activist, Frank Crump, Jr. Scholarships are awarded to students interested in pursuing degrees in STEM-related studies, and who best demonstrate academic excellence, leadership, service to the community and potential to make a difference for the next generation.

“Each year we’ve seen an increase in the number of applicants, all outstanding students,” Frank Crump III, who is the foundation’s financial director, said. “We greatly appreciate the support from our donors which is key to the success of the scholarship program. There is a lot of talent in the Vicksburg community and our goal is to help students make the next step in continuing their education.”