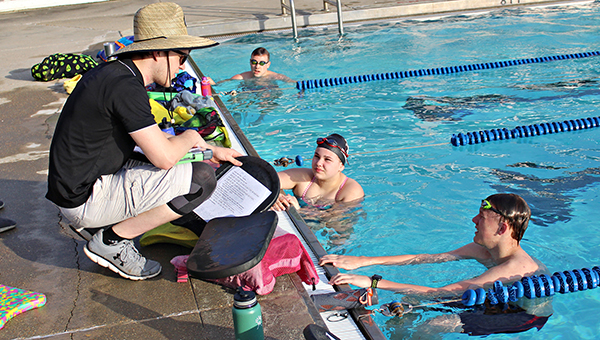 Like a group of wet, soggy bears emerging from their caves after a long winter’s hibernation, the Vicksburg Swim Association’s Killer Whales club team stepped outside for the first time on Tuesday.

The team’s summer season officially started a few weeks ago, but unofficially does so this week. They held the first of many outdoor, break of dawn practices at City Pool and will host the annual Stamm Family Invitational meet there this weekend.

Throw in a new coach, Frank Rapin, and Tuesday clearly marked if not a new beginning for the program then a shift in gears to a new competitive cycle.

“We’ve had four long course meets already, so the summer season starts in early to mid-April. But all of those are indoor facilities, so now we’re going to start hitting the outdoor meets. It’s fun. It’s that transition into the summer feel,” said Rapin, who was hired in January.

The Stamm Family Invitational is the VSA’s showcase event. Six teams and more than 200 swimmers will come to City Pool for the three-day meet, which begins Friday at 11 a.m. with short course youth events.

The long course portion of the meet, when laps are 50 meters long instead of 25, is Saturday and Sunday at 10 a.m. each day. City Pool is closed to the public all three days and will reopen on Monday.

Rapin said preparations for the meet have been hectic, but in a good way.

“It’s all about embracing that. The more you have, the more hectic it is and the better the meet is doing so the more entries you can get it’s always better,” Rapin said. “This is my first time hosting an outdoor meet, so I’m excited to see how the weather plays into it. It’ll present some different challenges. I think this is a cool way that we set it up with the short course on Friday and the long course on Saturday and Sunday. It gives everyone a chance to get their best times in both of them.”

Rapin was hired in January to replace longtime VSA coach Mathew Mixon, who left to take over the Sunkist Swim Team in Jackson. The 26-year-old from Michigan, like a lot of Northerners spending their first summer in Mississippi, said he’s still getting used to the heat and humidity but otherwise said the transition in leadership has been a smooth one.

“There’s been so many people in this organization that helped in a lot of different ways, so I can focus on the coaching and the nuts and bolts of that,” Rapin said. “The kids are great. They’ve been really respectful. I think they’re entering a new phase. They’re getting out of school, so that’s going to present its own mental challenges. But they’re a dedicated group and they’ve been real fun to coach. I’m looking forward to the transition to the outdoor pool.”

Along with coaching the VSA program, Rapin has been hired as the head coach of St. Aloysius’ high school swim team. He said that was a marriage of convenience for both sides, to some extent. Mixon previously coached St. Al’s team, and a number of VSA swimmers attend the school.

“For me, it was finding where most of the swimmers I was coaching in VSA would be, just so I could have that continuity through the seasons,” Rapin said. “I was head coach of a Catholic school before I came down here so I really do enjoy the community and I’ve found them to be very welcoming and helpful. That drew me in when I found out that was potentially available.”

The high school season will begin in August, and for now Rapin is dialed in on the summer club season. The Stamm Family Invitational is the first of six meets in June and July. Most are long course meets, and Rapin said getting into the 50-meter lanes at City Pool will be a benefit as they ramp up for the summer cycle.

“I think we’ve had a couple of good meets leading into it, which helps, and we’ve had two or three long course meets so they’ve gotten used to that format,” Rapin said. “But practicing is certainly an advantage. I’m looking forward to using this facility. It’s something not all teams get to do in Mississippi, or anywhere, to have the privilege of training in the Olympic format. It’s exciting stuff and brings in the summer. And it offers you different things as a swimmer and a coach to learn.”