Wallace looking ahead to Brigham Young 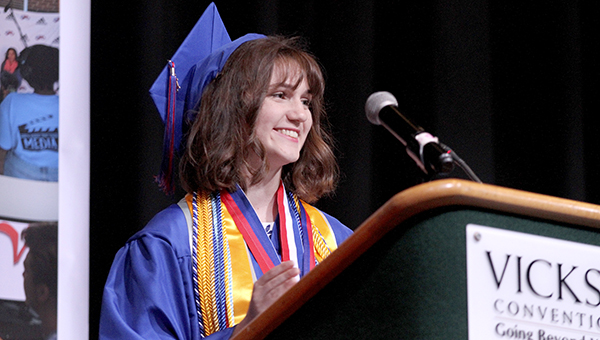 Being a good student is hard work, and being a great student is even more difficult, but gaining the title of valedictorian tops it all.

The task of being a high school student comes along with so many other unspoken responsibilities, such as becoming a functioning part of society, garnering volunteer hours and dealing with personal issues that constantly arise.

Warren Central High School’s 2019 valedictorian, Abigail Wallace, held the heavy load that being a valedictorian comes along with. In her four years at Warren Central, Wallace managed to climb up the ladder and become the leader of numerous groups and clubs, but the journey was a bit more difficult than she could have ever imagined.

“Outside of the normal teenage drama, everyday life was a struggle,” Wallace said. “I think the hardest part was overcoming the grief that came along with my sister, Afton Wallace.

“Just going from middle school to high school was already just a very dramatic change, and having that grief and frustration added on to that first year of high school made it my hardest year. So having to work through that with my teachers, music directors and coaches, and just being able to find a balance through all of the aspects of my life was probably one of the hardest parts of high school.”

Despite her personal struggles, Wallace was an exceptional student during her years at Warren Central and set an example for her fellow classmates by being a leader.

She played clarinet and bass clarinet as part of the Big Blue Band, was a member and later captain of the school’s swim team, president of the National Honor Society and served on the boards of the school’s prom committee and Mu Alpha Theta.

Though she was thrilled at being named valedictorian, she admits it was never in her intentions to actually acquire the title.

“I was shocked when they told me that I was valedictorian at first,” she said. “I was not expecting it.

“Ever since I could remember I’ve always wanted to do well in school, but valedictorian was never the main goal in my school career,” she said. “It just kind of happened.”

Wallace plans to attend the Brigham Young University and major in civil engineering and hopes to continue to encourage others to strive to be the best version of themselves.

“I think the best advice I can give would be to try your best where you are and know how you work,” Wallace said. “Not to overwork yourself or force yourself, but just to be accepting of your effort and the effort you put forth.”