Bulldogs embrace status as the favorites for Starkville Regional 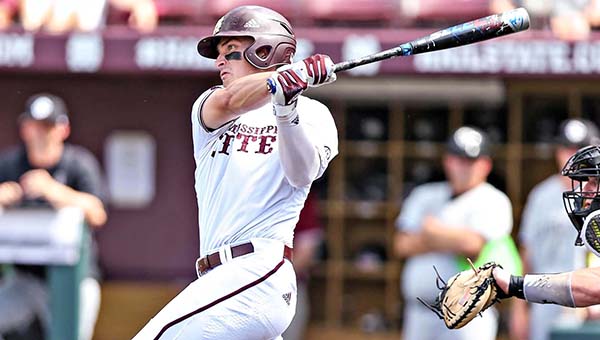 Mississippi State’s Justin Foscue gets a hit earlier this season. The Bulldogs will play Southern University in the opening game of the NCAA Tournament’s Starkville Regional on Friday. (Aaron Cornia/Mississippi State Athletics)

When they got within one win of the College World Series championship round last season, Mississippi State was a freewheeling underdog relying on pluck and rally bananas.

This time the Bulldogs are the lead dog. As the No. 6 national seed in the NCAA Tournament, they have a target on their back, a standard to uphold and, center fielder Jake Mangum hopes, a lot less drama on the road back to Omaha.

“This is what we came to college for. You come to Mississippi State for the big stage and for postseason baseball. You don’t come here to not make it to Hoover, to play in Hoover and be done,” Mangum said. “You come here to play postseason baseball and for that chance to get to Omaha. You can’t even compare anything to last year. Last year is over. Last year was a very, very crazy ride. This year has gone a lot smoother and we plan to keep it that way.”

Mississippi State (46-13) will begin what it hopes is a lengthy postseason run Friday at noon against Southern University (32-22) in the NCAA Tournament’s Starkville Regional at Dudy Noble Field.

Miami (39-18) and Central Michigan (46-12) play the other first-round game in the double-elimination regional at 7 p.m. Central Michigan is in the NCAA Tournament for the first time since 1995 and has an 18-game winning streak.

Mississippi State finished the regular season red hot, winning 13 of 14 down the stretch. Then it dropped its regular season finale to South Carolina and two out of three in the Southeastern Conference Tournament.

Head coach Chris Lemonis, though, shrugged off the team’s mediocre — and strange — week in Hoover. He noted its consistency throughout the year and some “funky” circumstances last week.

“We have hit all year, and we are one of the top offenses in the country. We played a funky 17-inning game. Then, we locked in with a really good pitcher in the Vanderbilt game. The last game (against LSU) got away from us, and we played from behind,” Lemonis said. “I like where we are at. I have a lot of trust in our players. We’ve got really good players, veteran players that have played in this. I look forward to seeing them play this week.”

Both Lemonis and Mangum said the Bulldogs have been preparing for this moment for a long time, and not just with last year’s College World Series trip.

The weekly grind of the SEC, they said, has gotten them ready for anything the NCAA Tournament can throw at them. Six SEC teams, including Mississippi State, are among the 16 national seeds hosting regionals this weekend.

“For us, it feels like postseason baseball a lot of weekends when you just play here,” Lemonis said. “When you play LSU, Auburn and Georgia at home, that feels like the postseason. That is where I think the advantage comes for us is being able to handle the atmosphere.”

The atmosphere is also something the Bulldogs have in their favor. Mississippi State ranks third in the country in average attendance, and a crowd of more than 10,000 is likely for its regional games this weekend.

Dudy Noble Field was rebuilt during the last offseason, and getting to host a regional — and possibly a super regional next weekend — is a good way to cap off its inaugural season, Mangum said.