Cochran remembered as ‘a great statesman’ 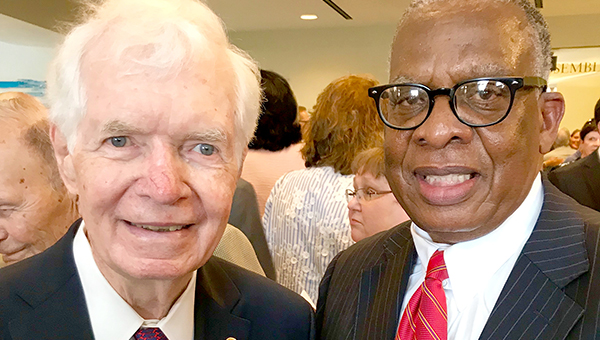 Local officials expressed sadness and condolences over the death of former U.S. Sen. Thad Cochran, who died Thursday at the age of 81 in Oxford.

Cochran’s death was announced by the office Sen. Cindy Hyde-Smith, R-Miss., who succeeded Cochran, according to the online political news service The Hill.

He was serving as Senate Appropriations Committee chairman when he resigned from the Senate in April 2018 because of health concerns.

“We have truly lost a gentleman and a scholar,” Mayor George Flaggs Jr. said. “One of the most respected congressional persons who served in my lifetime. My condolences, and I call on all of Vicksburg, to be in prayer with his family and many, many friends.”

South Ward Alderman Alex Monsour, a former state representative, said he worked with Cochran on state issues through the Legislature.

“It’s a sad day for Mississippi,” State Sen. Briggs Hopson said. “Thad was special guy and he was an outstanding statesman who represented our state so remarkably well in the U.S. Senate.”

He said hearing the news of Cochran’s death “was sad personally. He was a dear friend of my father’s. I knew him, and it’s a loss personally and a huge loss for the state of Mississippi.”

Cochran was born Dec.7, 1937, in Pontotoc and grew up in a suburb of Jackson. He received his a bachelor’s degree and law degree from the University of Mississippi, where he was an Ole Miss cheerleader as an undergraduate.

He spent three years in the Navy and studied international law for a year at Trinity College in Dublin, Ireland, before moving to Jackson, where he was in a private law practice for seven years before being elected to the House.

Besides serving as Appropriation Committee chairman, Cochran served on the Senate Agriculture Committee.

During his second time as Appropriations Committee chairman in 2015, Cochran and U.S. Sen. Roger Wicker successfully pushed to get a national historic landmark designation for the home of Medgar Evers, the Mississippi NAACP leader who was assassinated in 1963 outside the house in Jackson.

When the home, which operates as a museum, gained landmark designation in January 2017, it became eligible for grants and tax credits.