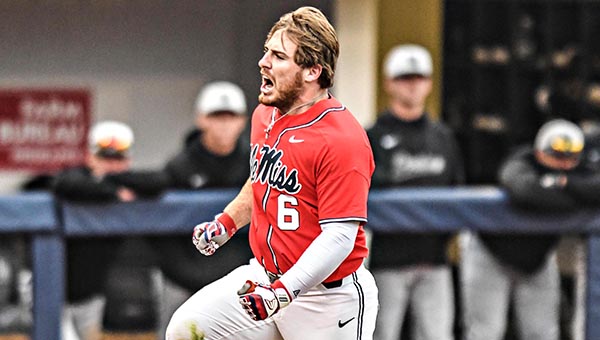 HOOVER, Ala — Almost from the time he set foot on campus, Thomas Dillard said, he’s been lobbying Ole Miss coach Mike Bianco to move him to the leadoff spot.

It was kind of a joke. For as good a hitter as he’s been, the 6-foot, 230-pound Dillard looks far from the ideal of a sleek, speedy leadoff man.

“I’ve been joking with coach (Bianco) for two years now about hitting leadoff,” Dillard said after a game at last week’s Southeastern Conference Tournament, drawing a rare post-loss chuckle from his coach.

The junior left fielder’s jokes are no longer just comedic jabs. Dillard, who had been hitting cleanup all season, was moved to the leadoff spot during the final regular-season series at Tennessee and quickly made it his home.

In eight games since the switch, Dillard is hitting .419 (13-for-31) with four doubles, five walks, six RBIs and six runs scored. He has hit safely in all eight games.

Dillard was hitting just .171 over a 22-game stretch before the change.

“Thomas got a little stagnant in the middle. He’s batted four for us, basically since he stepped on campus. He’s certainly one of the best hitters on the team. But he wasn’t productive where he was for the past few weeks,” Bianco said. “(Hitting him leadoff) is very scary if you’re the opposing team. Right off the bat you have a 240-pound guy that’s a switch hitter that can hit it out of any park.”

Dillard doesn’t look like your standard leadoff man. He’s listed at 6-foot and 230 pounds and more closely resembles a football linebacker or fullback.

Dillard, however, is a capable base runner with a knack for getting on base. He’s drawn a team-high 54 walks, has an on-base percentage of .444, and is 14-for-17 on stolen base attempts. His 14 stolen bases rank third on the team.

Dillard said there’s less pressure batting leadoff than cleanup, and he’s certainly thrived in the role. He was named to the All-SEC Tournament team last week while leading the Rebels to the championship game for the second year in a row.

This weekend, he’ll be at the top of the order when they host a regional in the NCAA Tournament. The Rebels open against Jacksonville State Friday at 7 p.m.

“It’s just kind of taken a little pressure off of me,” Dillard said. “Not having to hit fourth and worry about driving in everybody and trying to put pressure on myself to drive the ball out of the yard. I just have to get on base for the other guys.”