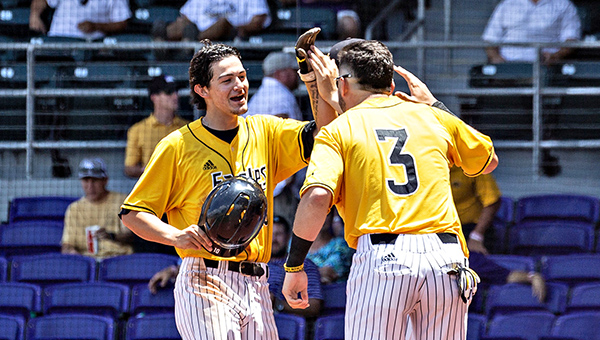 BATON ROUGE, La. (AP) — Storme Cooper has played sparingly this season for Southern Miss. Now that he’s getting some chances in the postseason, he’s making the most of it.

Cooper, a senior infielder, made the most of a rare start by going 3-for-5 with a home run and three RBIs as the Golden Eagles crushed Arizona State 15-3 in the opening game of the NCAA Tournament’s Baton Rouge Regional on Friday.

It was only the 12th game Cooper has started this season — but the fourth in a row — and he’s only played in 31 of Southern Miss’ 58 games. He added Friday’s heroics to a clutch two-run double in a win over Rice in the team’s Conference USA Tournament opener last week.

“It’s been a while,” said Cooper, whose last home run came against Old Dominion in 2017. “I felt like we were playing with a lot of emotion, and I got the guys fired up.”

Southern Miss (39-19) won its fifth game in a row and will take on either LSU or Stony Brook in the winners’ bracket on Saturday night.

“I am pleased the way our guys showed up on a hot day to go out and compete,” Southern Miss coach Scott Berry said. “They hit the sacrifice fly to put them up 1-0. The things that happened after that and us scoring 12 runs, it defined who we are.”

Cooper wasn’t the only one who had a big day against Arizona State (37-18). He and Matt Wallner both homered during a 12-run fifth inning that propelled the Golden Eagles to the victory.

Danny Lynch was 3-for-5 with a home run, double and four runs batted in. He hit a three-run home run in the eighth inning to put an exclamation point on a game that was decided much earlier.

Cooper led off the fifth with his first homer of the season and later that same inning drove in two runs with a single. Wallner drove home a run with a single in his first at bat of the inning before his two-run homer to right — his 22nd this season — capped the rally.

In all, the Golden Eagles sent 15 batters to the plate for 12 runs, on nine hits and no errors. Ten of their base runners scored and six of the hits were after two outs.

“I think we could probably watch the rest of this tournament and not see what happened in the fifth,” Arizona State coach Tracy Smith said. “Sometimes, that’s just baseball. Sometimes that happens when you just can’t shut it off. They put balls in play and found holes. We weren’t really giving it to them.”

Southern Miss starter Gabe Shepard (3-0), who missed much of the season while rehabilitating from elbow surgery, turned in his third outstanding start in a row.
He allowed two runs on six hits and struck out four in 5 2/3 innings, with a fastball exceeding 95 mph at times.

In his last four outings, including three starts, the freshman right-hander has allowed only two runs and nine hits in 19 innings. He has 27 strikeouts in that span.

Arizona State starter Alec Marsh shut out Southern Miss through four innings before blowing up in the fifth. He faced seven batters in that inning, and allowed three hits, two walks and two wild pitches. He left after walking Cole Donaldson to put runners at first and third with two outs, and Southern Miss ahead 3-1.

Marsh threw 108 pitches in 94-degree heat and 57 percent humidity at Alex Box Stadium.
“I’ve pitched in the humidity before because of where I’m from,” said Marsh, a Milwaukee, Wisconsin, native. “So it wasn’t on my mind at all. I don’t think it had a factor. It was just one of those days.”