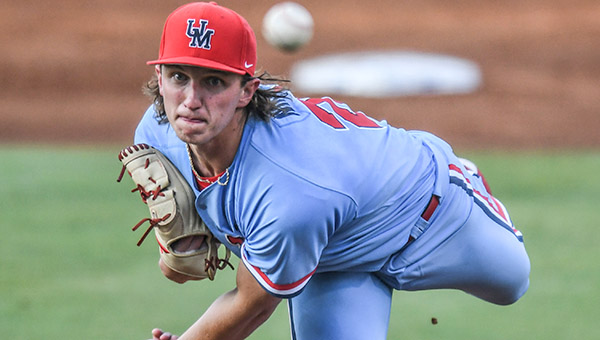 Ole Miss’ Doug Nikhazy pitches against Clemson in the NCAA Tournament’s Oxford Regional on Saturday. Nikhazy had nine strikeouts while pitching into the ninth inning and the Rebels won 6-1. (Bruce Newman/The Oxford Eagle)

OXFORD (AP) — Ole Miss freshman Doug Nikhazy struck out nine while pitching into the ninth inning, and the Rebels beat Clemson 6-1 on Saturday night to advance to the NCAA Tournament’s Oxford Regional final on their home field.

Kevin Graham added a pinch-hit homer leading off the eighth for the Rebels (39-25).

Nikhazy (8-3) had already thrown 111 pitches when he came out for the ninth with a chance for the first complete game this season by an Ole Miss pitcher. But the lefty issued his third walk before closer Parker Caracci got the last three outs.

After eight scoreless innings in a win over Texas A&M in the SEC Tournament, Nikhazy limited Clemson to four hits. The Tigers had consecutive hits to start the seventh, but their only run came on a double play grounder.

Clemson (35-25) plays Jacksonville State in an elimination game Sunday afternoon at 2, with the winner facing Ole Miss at 8 p.m.

Mississippi State (48-13) scored four runs in the first inning and two more in the third to take a 6-0 lead. Elijah McNamee started the scoring with a two-run double, Josh Hatcher had three hits and two RBIs, and Tanner Allen had four hits, including a solo homer.

Small (9-2) continued his dominant season, running his season strikeout total to 160 over 96 innings.

Mississippi State advanced to the regional championship game. Central Michigan and Miami will play Sunday at 2 p.m. for the right to face the Bulldogs at 8 p.m.

LSU 8, Southern Miss 4
LSU rallied after blowing a four-run lead in the seventh inning to beat Southern Miss and advance to the championship game of the Baton Rouge Regional.

Southern Miss (39-20) tied the game at 4 when Matthew Guidry hit a grand slam off LSU closer Zack Hess in the bottom of the seventh inning. Guidry went to one knee to swing at a curveball and lifted it over the right field wall.

LSU (39-24) regained the lead in the top of the eighth, however, and kept it. Saul Garza hit a two-run single with the bases loaded and scored on another single by Chris Reid to put the Tigers ahead 7-4.

They added another run in the ninth inning when Josh Smith scored on a wild pitch.

Southern Miss only had five hits in the game, two of them by Guidry. All five of its pitchers allowed at least one run.

The Golden Eagles are still alive in the double-elimination regional. They’ll play Arizona State — a team they beat 15-3 in the opening game — Sunday at 2 p.m. The winner will turn around and play LSU at 8 p.m., and must win twice to advance to the super regionals next week.

A deciding game for the regional title would be played Monday at 3 p.m., if necessary.