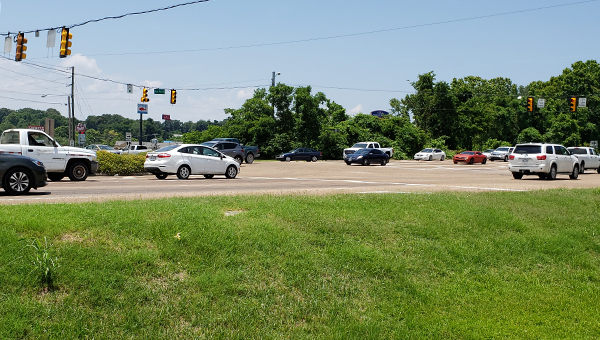 Traffic moves through the Halls Ferry Road/Pemberton Square Boulevard/South Frontage Road intersection Friday. The Board of Mayor and Aldermen May 24 passed a resolution to seek federal funds for a U.S. 61 South/Mississippi 27 loop road to ease traffic on Halls Ferry Road. (John Surratt | The Vicksburg Post)

The proposed $10 million bypass road from U.S. 6 1 South to Halls Ferry Road and Sports Force Parks on the Mississippi is off the table.

It’s being replaced by a bypass, or loop, road from U.S. 61 South to Mississippi 27.

The Board of Mayor and Aldermen May 24 approved a resolution dissolving the committee Mayor George Flaggs appointed in 2017 to study the U.S. 61 South-Halls Ferry road, then passed a second resolution to seek federal funding to build an east-west corridor from U.S. 61 South to Mississippi 27.

“I’m trying to get it back on the agenda, because there have already been some preliminary studies. If that happens, I’m confident we can get some federal funds if they do an infrastructure bill through the department of defense or Homeland Security or through the appropriation process.”

There is no engineering or design for the proposed road, but the city’s comprehensive plan released in 2015 shows a proposed east-west loop road from U.S. 61 South starting in the area of Old Cain Ridge Road and going east to Gibson Road and then on to Mississippi 27.

“The real issue is getting traffic off Halls Ferry,” Flaggs said. He would not say if a link to the sports complex from the proposed road was possible in the future.

“Right now, my complete interest is in trying to relieve some of the traffic off Halls Ferry and be able to accommodate ERDC (U.S. Army Engineer Research and Development Center) and the surrounding areas, and provide an evacuation route also from Grand Gulf and some other things.”

Warren Central High School on Mississippi 27 is a central collection point for people from Claiborne who would have to evacuate because of an emergency at the Grand Gulf Nuclear Power Plant.

Flaggs in 2017 proposed building a bypass road from U.S. 61 South starting at Dana Road and going south to Halls Ferry Road and ERDC. The road would also provide a second entrance to the sports complex. It was shelved after Dana Road residents complained about the route.

The proposed road would also have to cross a floodplain along its route from Dana Road to Halls Ferry.

In February, Flaggs renewed the push for the road, authorizing city attorney Nancy Thomas to begin investigating the plan and telling the Board of Mayor and Aldermen Dana Road was still under consideration as a starting point, but other routes would be considered.

The project would also open land between Dana Road and  Halls Ferry for development.

“I will not allow the progress or the progressive movement of this city to be stagnated by few people that don’t live in the city. We need that road,” he said.

According to the resolution the board approved May 24, “The city of Vicksburg has determined that a road from Hwy. 61 South to the sports complex is not needed at this time.”