St. Al’s Brennon Williams is the Post’s Track Athlete of the Year 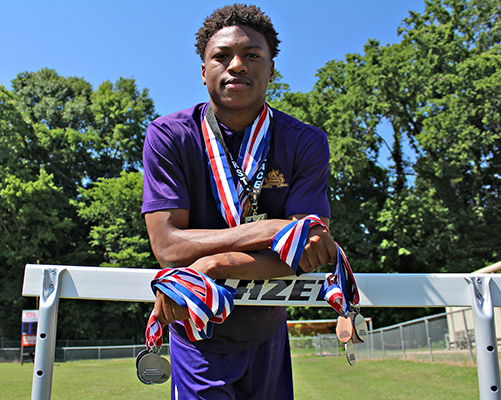 Brennon Williams walked across the football field at St. Aloysius with medals clinking and clanking with every step. He had a few around his neck, and a handful in each fist.

“How many you got?” a classmate there for spring football practice asked.

“Fifteen,” Williams answered with a smile and soft chuckle.

The medals were all of the ones the sophomore sprinter earned during this high school season, plucked off his bedroom wall for a photo shoot. A half-dozen were earned on a single day at the MAIS Class 3A state meet — two of them gold — which is why he needed them on this day, to celebrate his selection as The Vicksburg Post’s boys track and field Athlete of the Year.

“It’s a really amazing honor. Especially to get it with all of the good athletes in Vicksburg,” Williams said of the award.

Williams is the fifth consecutive St. Al athlete to win the Post’s award in its brief six-year history. He followed in the footsteps of DeMichael Harris — a two-time winner who now plays football at Southern Miss — Donald Woodson and Connor Bottin as not just the Athlete of the Year, but a multiple state champion as well.

Williams took the Class 3A title in the 110 meter hurdles and the 400 meter dash by a half-second each, or about 10 meters on the track.

“He’s the next one,” St. Al coach Michael Fields said. “He’s a hard worker. He’s got some innate talent that hasn’t come out yet. The good thing about him is that he’s going to be a late developer, so I expect some great things the next two years. He’s a D-I talent.”

Williams’ most impressive race at the state meet might have been one he didn’t win. In the 300 hurdles he finished with a time of 39.45 seconds, four-tenths of a second better than the state record — and lost. Lee Academy’s Nickos Nolan finished in 39.42 seconds to edge him for the state championship.

“He was good, but I kind of want to race him again because I think I can beat him,” Williams said. “It’s bittersweet. I can’t be mad about it since I broke the record, but I kind of wish I’d won.”

Nolan is only a junior, so Williams should get his rematch next year. The rest of the MAIS will also have to deal with Williams for the next two years, since he has no intentions of slowing down.

Since joining the MAIS for the 2016 track season, St. Al has claimed Class 3A records in seven of the eight sprint events at the state meet. The school also holds five of the eight overall records in the sprints. This was the first time they’ve failed to set a record at the state meet, although that stat comes with a notable asterisk since Williams would have set the 300 record this year if he’d won.

Williams plans to change that by the time his high school career is over and bring the record home to Vicksburg.

“By the time I get out of here, I’m looking forward to being one of the best to run the 300 hurdles and setting records at the school. I’m going for the 300 record, and I’m hoping to be close to the 400 and 110 records too,” Williams said.

Fields certainly believes Williams has the ability to get the job done.

“Brennon’s a kid that we knew had some hidden talent, but we just had to find out what events he could do. He’s starting to grow into his events and you can see he’s still a young kid. Hopefully by next year he’ll get a little bigger and stronger, and we’re looking for great things from him,” Fields said. “You wish you had 20 of them like that.”