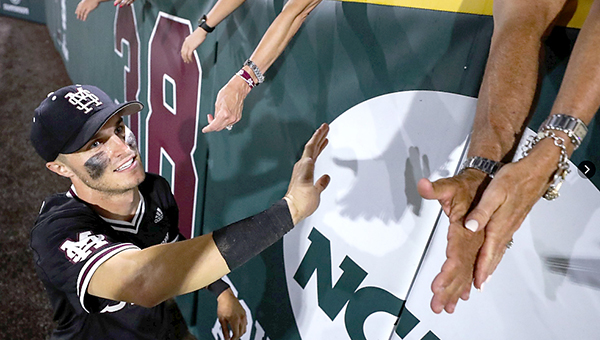 Mississippi State senior Jake Mangum thanks the fans following the Bulldogs’ win over Miami Sunday to claim the regional title. Mangum went 3-for-4 in the game to help lead the Bulldogs into the Super Regional next weekend. (Aaron Cornia | Mississippi State)

STARKVILLE — The Mississippi State Bulldogs swept their way through their regional over the weekend, finishing the sweep with a 5-2 win over Miami Sunday evening. This marked MSU’s eighth regional title in 13 attempts.

Senior Peyton Plumlee picked up the win for the Bulldogs, allowing just two runs over five innings of work. Redshirt-junior Trysten Barlow pitched the sixth, with Colby White closing the game out in the seventh.

After senior Jared Liebelt worked out of a bases loaded jam in the eighth, graduate student Cole Gordon entered and threw a clean ninth inning, with one strikeout to earn the save.

“I thought our starter, Peyton Plumlee, was awesome. Then, all the guys we ran out of the bullpen did their job,” Mississippi State head coach Chris Lemonis said. “We played great defense and had some clutch hitting. We faced some really good arms tonight, and I thought they threw some guys with really good stuff. We just had some big hits.”

Some of those big hits came from senior Jake Mangum, who went 3-for-4 on the night and became the first State player in program history to post multiple 100-hit seasons.

One of those hits Sunday was a double, giving Mangum 71 for his career and moving him into a tie atop the MSU career charts with Travis Chapman (1997-2000).

“It was nice to get Jake [Mangum] back in the mix,” Lemonis said. “He was a big part of tonight with some big at-bats. He was awesome, and overall a fun night at the ballpark.”

The Hurricanes (41-20) opened the scoring with a solo home run, before the Bulldogs (49-13) scored three runs in fourth. After Miami pulled within one, 3-2, with a single run in the sixth, State added two insurance runs in the eighth.

In all, six State players earned NCAA Starkville Regional All-Tournament honors, tying for the third-most all-time behind the 1985 and 2011 teams that each garnered seven.