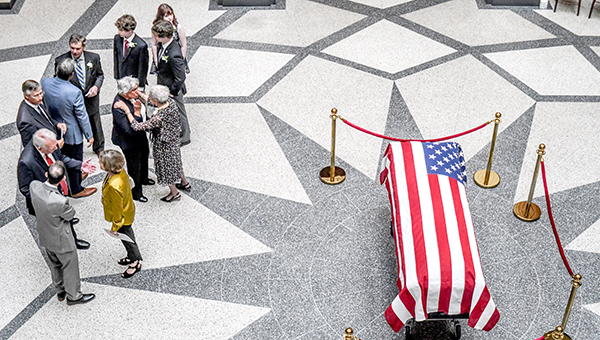 The body of the late former U.S. Senator Thad Cochran lies in state during a public visitation at the Robert C. Khayat Law Center at the University of Mississippi in Oxford Sunday. Cochran died on Thursday in Oxford. (Bruce Newman | Oxford Eagle)

JACKSON (AP) — Former U.S. Sen. Thad Cochran was a master of the federal budget process, quietly shrugging off criticism about pork-barrel spending while directing billions of dollars back to his home state of Mississippi.

Cochran died Thursday at age 81. He was the 10th longest-serving senator in U.S. history and wielded power for several years as chairman of the Appropriations Committee.

Through federal spending in what has long been one of the poorest states in the nation, Cochran leaves a legacy that’s visible in many ways, including catfish on dinner plates and Navy ships on the seas.

There’s even a variety of rice named “Thad,” in his honor. The USA Rice Federation said the name was given by employees at Mississippi State University’s Agricultural and Forestry Experimentation Station.

In the rural flatlands of the Delta, Jimmy Avery is director of the Thad Cochran National Warmwater Aquaculture Center, which is part of the Delta Research and Extension Center in Stoneville. The aquaculture center’s work focuses on genetics, water quality, and fish health to try to improve production for farm-raised catfish.

Avery said Cochran’s name and photo are on a wall, and he and other scientists used to meet with the senator in Washington. Avery said Cochran was well versed on agriculture issues and asked informed questions about their work, including how foreign competition affects the catfish industry.

“He was responsible for a very wise investment here in Mississippi at a time when a lot of other states were not making investments in aquaculture,” Avery said Friday.

Cochran told The Associated Press that the federal government had a large federal debt and “I think that is a danger to continued economic growth and prosperity,” so officials had to be cautious.

Cochran continued: “A certain amount of debt is acceptable, I think. And the experts provide testimony at hearings every year when we’re reviewing federal requests from the federal government for spending funds to continue to operate their departments.”

One of many buildings named for the former senator is the Jackson Medical Mall Thad Cochran Center, an 800,000-square-foot (74,322-square-meter) former retail space that now houses physicians’ offices, an outpatient cancer treatment center and other medical operations. It’s in a mostly African American neighborhood in central Jackson.

Democratic Rep. Bennie Thompson, the longest-serving of Mississippi’s current four House members and the only one who’s African American, said in 2014 that Cochran’s work in securing federal money was vital to developing the medical mall in the mid-1990s.

On the Mississippi Gulf Coast, Cochran secured billions of dollars for recovery after Hurricane Katrina struck in 2005. He also earmarked money for the Gulfport Harbor — $10 million in 2009 alone. His influence as Appropriations Committee chairman also helped one of the state’s largest employers, Ingalls Shipbuilding, which has received contracts to build military vessels.

Cochran also leaves a legacy of people in leadership positions in Mississippi.

The current president of Delta State University, Bill LaForge, worked as legislative counsel and chief of staff for Cochran.

The current president of Mississippi State University, Mark E. Keenum, worked for Cochran for 18 years, with 10 of those as the senator’s chief of staff.

“He provided extraordinary leadership and walked with giants, yet remained humble and true to his Mississippi roots,” Keenum said Thursday. “Sen. Cochran had a tremendous influence on my life. He taught me how to respect people, how to listen, how to make decisions based on facts and then to move forward.”