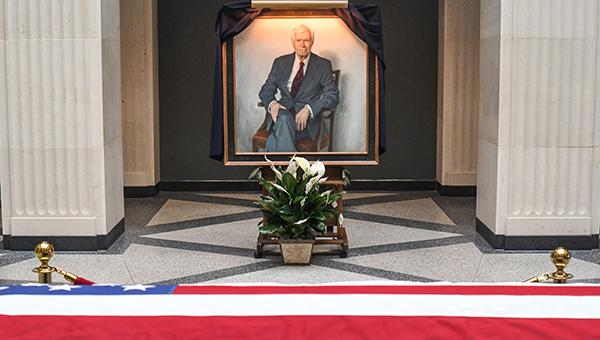 The body of former U.S. Sen. Thad Cochran lies in state Sunday in front of a portrait of the senator, at the Robert C. Khayat Law Center at the University of Mississippi in Oxford. Cochran died on Thursday in Oxford. (Bruce Newman | Oxford Eagle)

JACKSON — Before Thad Cochran of Mississippi became one of the longest-serving U.S. senators in history, he earned varsity letters in four high school sports, delivered milkshakes as a restaurant carhop, became an Eagle Scout, was a college cheerleader and fraternity president and served in the U.S. Navy.

Cochran was 81 when he died last Thursday at a veterans’ nursing home in Oxford. The Republican was the 10th longest-serving U.S. senator in history.

Cochran was elected to the U.S. House in 1972 and to the Senate in 1978, holding power for several years as chairman of the Senate Appropriations Committee and bringing billions of dollars to Mississippi for agriculture, university research, military contracts and disaster relief. He retired in April 2018.

He was dubbed the “Quiet Persuader” because of his gentlemanly demeanor.

“He was an icon of a better era and a role model for anyone and everyone who serves,” Republican Lt. Gov. Tate Reeves said.

Dozens of people who worked for Cochran attended the service Monday, including Ron Jackson of Washington, who is now senior director of government affairs for Catholic Charities USA. When Jackson went to work for Cochran’s Washington office in 1974, he became one of first African American congressional staff members from Mississippi since Reconstruction.

Jackson worked for Cochran for three years and said Cochran treated him and other staff members the same way he treated constituents and congressional colleagues — with dignity and respect.

After the funeral, Jackson recalled how, as a young staffer, he was walking between a House office building and the U.S. Capitol one day when U.S. Rep. Barbara Jordan, a Democrat from Texas, stopped and asked him who he was. Jackson told her he worked for Congressman Cochran. He said Jordan responded: “’We like Mr. Cochran. We are friends.’”

Lynnette Johnson Williams said she worked on Cochran’s 1984 Senate campaign before being hired to work on his Senate staff. She remained more than nine years, with part of that time as his press secretary. She was among the first African Americans to work as a press secretary for any U.S. senator.

“He was a teaching boss, a caring boss. … It was the best job I ever had,” Johnson Williams said after the funeral, which she attended with her daughter, Naomi Shelton.

Shelton grew up knowing Cochran and worked as a summer intern for him in 1997.