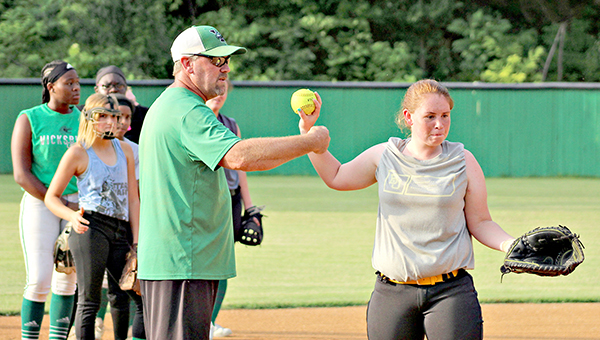 Vicksburg High softball coach Brian Ellis, left, works with infielder Jamie Ward during a drill at a recent practice. The Missy Gators are among four Warren County softball and baseball teams who will soon be displaced because of renovations and construction at their home fields. (Ernest Bowker | The Vicksburg Post)

For the rest of the year, the most concerning opponents for Vicksburg High and Warren Central’s baseball and softball teams are literally tearing up the base paths.

Bulldozers have started dirt work as part of renovations at Vicksburg’s Showers Field. Work crews will eventually make their way to the Softball Swamp up the street, and across town to Lucy Young Field and Viking Field at Warren Central.

The eventual payoff is a slew of upgraded, gleaming baseball and softball palaces. For the next six months or so, however, the work will displace the teams and cause a number of logistical hurdles that will have to be dealt with and overcome.

“For the most part we have to split time with St. Aloysius at Bazinsky Field. As soon as our hitting facility is finished we’ll get back in there to hit, and then go to the city softball fields for throwing,” said Vicksburg High baseball coach Antonio Calvin, giving a hint as to the nomadic lifestyle teams will lead for the next few months. “We’re playing our home games (at Showers Field) next season. Everything will be done, hopefully, by Feb. 25 when we play our first home game.”

The fields are more than just game venues, however, and that’s where most of the challenge lies. Teams will not have a home field to practice on, and access to adjacent facilities such as batting cages and dressing rooms might be limited as construction work progresses.

The four local teams have already made some adjustments to the summer schedule. Other than VHS’ baseball team, which plays at Bazinsky Field, none of them will play home games in June. All other teams will play opponents in the Jackson metro area twice a week and only conduct light workouts.

“The field being under work is not a big thing for the summer. Come the fall it might be a different story,” Warren Central baseball coach Randy Broome said.

While the summer practice period in June consists mostly of games, the effects of not having a home field will be felt more when school begins in August. The baseball teams use that time to lay the foundation for their season, Calvin said. The softball teams, meanwhile, play their slow-pitch season from mid-August to early October.

All of them are drafting plans in the likely event they won’t have a true home field to play and practice on.

Calvin and VHS softball coach Brian Ellis said they’ll use the adult softball fields at City Park for practice. Ellis and the Missy Gators will also use those and Sports Force Parks on the Mississippi for games, but added that there are some issues with both.

“That would be the best case scenario for practice. Game-wise, it’s not the best field in the world,” Ellis said. “And then when games are played out there (at Sports Force) we don’t get the gate or concessions and still have to pay the umpires. They’re great to work with, but that’s not an ideal situation.”

While Vicksburg has a potential alternative near its campus, Warren Central’s biggest problem is that it does not. Players and coaches would have to bus over to Sports Force Parks or Bazinsky Field. In the case of baseball, which is only allowed to have players for one class period per day in the offseason, that is an almost impossible task to achieve in such a limited time.

Warren Central’s softball team will have a regular practice period during the slow-pitch season, but still must find a new venue. Coach Dana McGivney said she is looking at using the fields at Halls Ferry Park, which previously served as Vicksburg High’s home field before the Softball Swamp was built in 2014, for its home games.

McGivney said, optimistically, that she was treating it like an adventure.

“I think it’ll be kind of fun. It’s going to be different, obviously, especially once we start playing this fall and we still don’t have a field. That may be a little bit different,” McGivney said. “But hopefully when we go through this summer fast-pitch season without having a home field will get us ready for this fall.”

As the rest of 2019 unfolds, all of the coaches agree that waiting for the construction to start is the hardest part. Each day that passes without any work done is one more they’ll be without a home field on the back end, and there is some uncertainty about when exactly work will begin.

“It’s just the not knowing. It wouldn’t matter to me if they tell me I’m playing up in those trees. But I think it’ll be fine. They’ll have it all situated,” McGivney said.

Ellis, too, said he’s simply dealing with the situation instead of focusing on the inconveniences it creates.

“We’re on our field until they start messing with it,” Ellis said. “There’s schedules and things like that as far as when things are supposed to start. I don’t know when it is. That’s all beyond our control, so I’m going to go with the flow.” 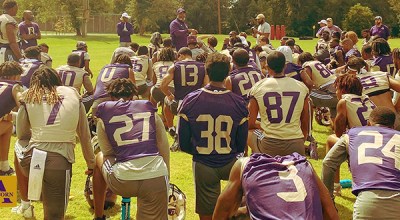 Vacations and other things that make me happy