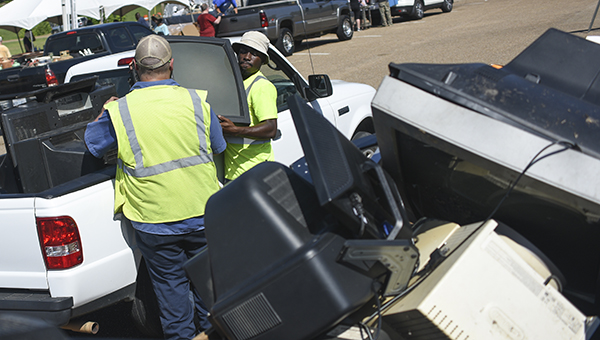 Zack Love, left, and Bud Jackson work together to unload a television from the back of truck during last year’s Warren County Hazardous Waste Day. The 22nd annual household hazardous event is Saturday at Sherman Avenue Elementary School.

The program is co-sponsored by the Warren County Board of Supervisors and the Mississippi Department of Environmental Quality.

County environmental officer Katie Martin said the collection stations will be set up on the school’s parking lots. The annual collection day moved this year to Sherman Avenue from Warren Central High School because of construction at Warren Central.

She said workers will direct people through the collection areas, and signs will be posted identifying each station.

Metals, tires, clothes and furniture will also be accepted. Martin said the computer equipment is collected by an organization that will dispose of it.

“The only thing we won’t take is refrigerators and freezers with food in them,” Martin said. “We can’t take it (the food).”

She said workers will shred documents, adding people will have to remove any staples, paper clips, binding clips or other metal objects, because they will jam the shredder.

People can also drop off torn and worn America Flags for proper disposal.

“We’ve done that last year and the year before,” Martin said. “What we do is work with America Legion and we’ll collect flags, and usually around 1 p.m. (on the collection day) they’ll come by and pick them up and they have their ceremony and dispose of them.”

Children thriving with Excel By 5

Kindergarten is an important step in a child’s life. For many, it will be their first time away from home... read more